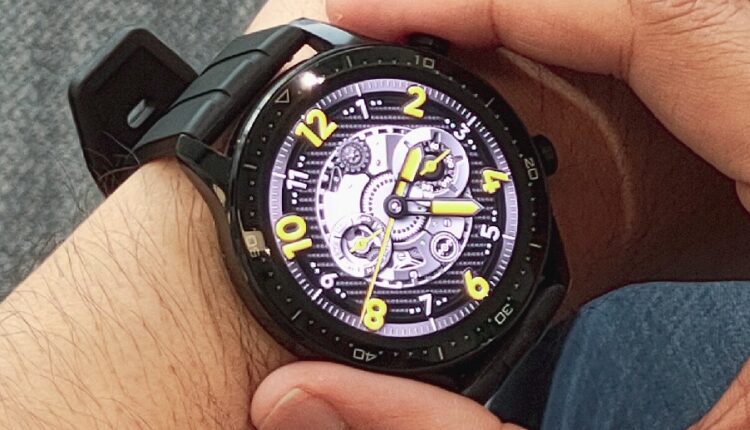 Share
The sporty one. Meanwhile, more wearables measure the oxygen saturation in the blood than leave the display permanently on. The Oppo subsidiary’s realme Watch S Pro is also the only smartwatch with an always-on display so far. Our review explains what else it can do and what it has over its predecessor.
Inge Schwabe, 👁 Inge Schwabe, ✓ Brian Burriston (translated by DeepL / Ninh Duy), 08/15/2021 🇩🇪 🇮🇹
Accessory Gadget Smartwatch Wearable
realme Watch S Pro
Display
1.39 inch, 454 x 454 pixel 326 PPI
Weight
44 g ( = 1.55 oz / 0.1 pounds), Power Supply: 0 g ( = 0 oz / 0 pounds)
Price
129 Euro
Note: The manufacturer may use components from different suppliers including display panels, drives or memory sticks with similar specifications.

With a minimally smaller case diameter, the display has grown from 1.3 to 1.39 inches and gains sharpness with 454 x 454 px (326 ppi) compared to 360 x 360 px (278 ppi) before. Realme replaces the TFT display with an AMOLED screen and gives the Watch S Pro an always-on mode. The Watch S, on the other hand, determines the brightness automatically; alternatively, the screen can be adjusted manually in 5 steps on both. The silicone strap with quick-release fastener can be replaced with a standard 22 mm (~0.9 in) strap. On its homepage, realme advertises its own replacement bands made of vegan leather (imitation leather) and stainless steel.

The display is still protected by Corning Gorilla Glass. The beveled surface towards the edge now includes the bezel , as can be seen in the penultimate picture below. On the back of the Watch S Pro, 4 screws hold the case lid. The magnetic charging pins sit further out, which is why the charger of the realme Watch S does not fit the Watch S Pro. In both, the PPG sensor records the blood oxygen saturation (SpO2) in addition to the heart rate. However, only the Watch S Pro has a compass and GPS.

The app realme Link is now available not only for Android but also for iOS. It manages IoT devices such as lamps, scales, ear buds and also the smartwatches from realme. After pairing, you set the interval for monitoring the heart rate, among other things, as well as an upper and lower limit beyond which the fitness watch should sound an alarm.

You can download additional watch faces via the Watch Face Store – according to realme, there are around 100 in total – or create your own from a photo. 8 watch faces are preloaded. The Watch S Pro does not store more than one, but replaces it when you choose another one in the app.

As before, the Watch S Pro is operated via the touchscreen and two buttons. The lower button starts the training app, the upper one turns the display off or puts it into always-on mode if it is active. The installed tools include an alarm clock with up to 10 alarms, a timer and stopwatch, a flashlight, weather information, a compass and smartphone search, as well as controls for the camera and music on the smartphone, both of which also control the iPhone.

The Watch S Pro reports incoming calls and notifications via vibration. It is not possible to respond to messages from social networks. It does not display emojis, and the icon of the originating app is only displayed in some apps, such as WhatsApp.

The app realme Link connects to Google Fit at Android and to Apple Health on the iPhone. If desired, the fitness watch regularly reminds the user to drink something and exercise. It adds up the hours spent not only sitting down, but also moving at least a little, counts the steps and estimates the calories burned.

It monitors heart rate every 5, 10, 20 or 30 minutes, depending on the setting, while oxygen saturation can only be monitored manually. The app displays both over the course of the day, week and month, as well as the steps, calories burned and active training minutes.

If you wear the realme Watch S Pro at night, it shows the duration of sleep phases and when you fell asleep and woke up. The app also visualizes the course of the heart rate.

The training app has 15 sports on offer, including swimming. The sports tracker is protected against water penetration up to 5 ATM and locks the screen when swimming training starts. When swimming, realme determines swimming fitness (SWOLF value), among other things.

For other sports, you can control the music on your smartphone during the workout. The training log is stored by realme both on the Watch and in the app. While the watch itself displays numerous training results for sports like running and cycling, the log in the app turns out to be rudimentary. With the exception of a pie chart of the affected heart rate zones, it does not provide any graphical evaluations.

The following screens show the training screens for running, cycling and swimming, and a training log after running as an example.

To get an indication of the optical heart rate monitor’s precision, we regularly alternated between looking at the Watch S Pro and the transmitted heart rate of a Polar chest strap while running. The deviations were rarely more than 3 beats per minute, which would be extremely precise.

Although the observation coincides with the determined average in the two logs, which realme shows with 155 beats, Polar with 154, the observation loses its significance due to the high difference in the maximum heart rate: realme determined it with 178 beats per minute compared to only 163 in the Polar H10. The smartwatch’s less detailed progress chart suggests that the realme tracker struggled with fluctuations shortly after the start; however, a valid comparison is not possible without a sufficiently detailed chart.

The realme Watch S Pro has a compass app and supports dual-band GPS. A navigation solution is not installed.

The route recorded while running is often beside the actual track, as can be seen in a residential area and when crossing a railroad track. However, in the area of a river bend, where other wearables occasionally break out, the fitness watch keeps track. At the end of the test run, about 100 meters (~109 yards) are missing from the actual distance covered over 5000 meters (3.1 miles).

realme specifies the runtime of the 420 mAh battery with up to 14 days. We do not doubt that, especially since the Watch S (without always-on display) even ran longer than announced by realme in the test. Additionally, we wanted to know how long the battery lasts when you are unsparing with the resources. Therefore, we combined the brightest dial with the longest possible illumination time of 20 s, set the brightness to 100% high and activated the Always-on mode. In this scenario, the endurance depends even more on how often the display lights up due to incoming notifications or app usage. In the test, the battery additionally survived two GPS-supported workouts of half an hour each and still managed a good 5 days in the end. You can’t complain about that. In addition, realme relieves the battery when the Watch S Pro is not worn. The screen then dims completely, regardless of the other settings.

The realme Watch S Pro needed 1 hour and 38 minutes to charge with a remaining capacity of 7%.

The Watch S Pro left a good impression in the test, but the realme Link app urgently needs a facelift

The smartwatch itself is well equipped, although an additional altimeter would enable recording routes with an altitude profile. realme opted for a compass instead

The AMOLED screen is bright and was always easy to read in the test.

Thanks to the display size of 3.9 inches, the screen is also quite suitable for viewing the workout analysis after sports. Those who are interested in their workout success do not have any other option with realme at the moment; the log in the app is weak, and connecting with services other than Google Fit or Apple Health was not offered by the app in the test period.

More sports and an additional VO2max test are offered by realme on the Watch 2 Pro. We tested the less expensive realme smartwatch almost simultaneously, and the results will follow in a few days. If you are looking for a comparable smartwatch, we also recommend taking a look at Xiaomi’s Mi Watch.