Google has begun sending out emails to Android users warning that devices with Android 2.3.7 (Gingerbread) and earlier will be blocked from logging into Google Accounts from late September. This can make it difficult to use the company services and proprietary apps on older devices, as well as other inconveniences.

“As part of our ongoing efforts to keep our users safe; Google will no longer allow sign-in on it devices that run Android 2.3.7 or lower starting September 27, 2021;” Android Help Community Manager Zak Pollack explained.

The inability to log into your Google account will make the interaction with the device much less comfortable. In addition to applications and services; users will not be able to create new Google accounts, perform a factory reset, change account password, etc. This applies to devices with versions of Android that were released before December 2010.

Users of devices affected by this issue are advised to update the software, if possible; or switch to more recent device models. As for the new version of Android 12, then its official launch should take place this fall. 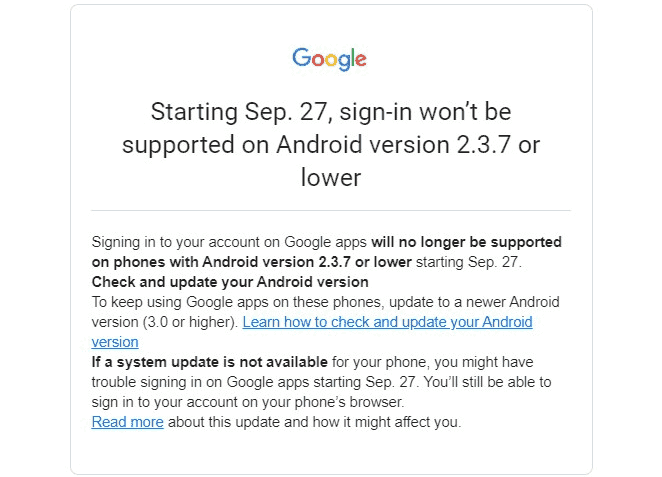 Google is well on its way to rolling out the stable OS in the fall. Beta 3 for Android 12 continues to add new features such as scrolling through screenshots, faster universal app search on the device, improved auto-rotate, and more. Google says this version of it has “Android 12 APIs and an official SDK”; which means there shouldn’t have major feature changes.

The most exciting new feature in Android 12 Beta 3 is “improved and fast auto-rotate”. Google is now using a front-facing camera and facial recognition to determine which orientation you are trying to hold your phone in without relying on the accelerometer. According to the company, this will come in handy when the user is working with the device lying on the couch or in bed. It also allows you to get rid of unwanted auto-rotate triggers and reduce latency by 25%.

To appease all privacy advocates, Google has stated that images are not stored on the device or sent. But still, this feature has a minus – constant supervision from the front camera, which will quickly consume the battery life.