Albert Einstein's theory of relativity asserts that the gravitational pull from black holes is so immense that it can bend magnetic fields and twist light, making the fields act as a mirror 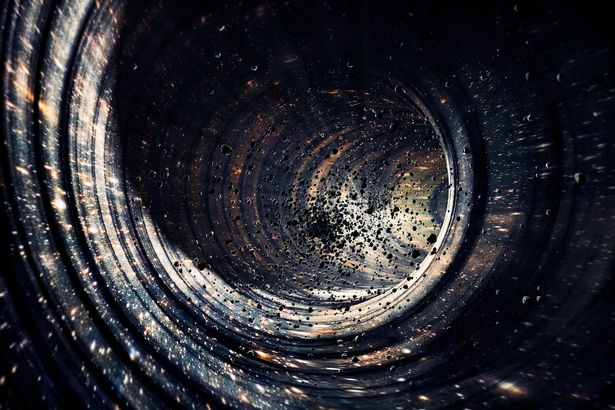 Astronomers have been able to look behind a black hole and see light coming from the other side for the first time, proving Albert Einstein’s theory of relativity.

Using high-powered X-ray telescopes, the team of international researchers were studying a supermassive black hole 800million light years away when they made the incredible find.

During the study, which was published by Scientists from Stanford University, astrophysicist Dan Wilkins initially spotted a series of bright flares when he sent out X-ray “echoes” – which is common with black holes.

However, what amazed him was that additional flares then appeared that were smaller and of different “colours” than the bright flares.

Black holes, which come in different sizes, are formed when very massive stars collapse at the end of their life cycle.

Supermassive black holes are the largest kind, growing in mass as they devour matter and radiation and perhaps merging with other black holes.

These phenomenally dense celestial entities are extraordinarily difficult to observe despite their great mass because it does not allow light to escape.

This incredible find – which comes two years after the first photo of a black hole was revealed – confirmed Albert Einstein’s 1915 theory on general relativity.

He asserted that the gravitational pull from black holes is so immense that it can warp the fabric of space, bending light and twisting magnetic fields.

The theory predicted that because of this it should be possible to see waves of light from the other side of a black hole because these warped fields would act as a mirror.

Roger Blandford, a co-author of the research, published in Nature, said: “Fifty years ago, when astrophysicists starting speculating about how the magnetic field might behave close to a black hole, they had no idea that one day we might have the techniques to observe this directly and see Einstein’s general theory of relativity in action.”

Dan Wilkins an astrophysicist from Stanford University said: “Any light that goes into that black hole doesn’t come out, so we shouldn’t be able to see anything that’s behind the black hole.”

“The reason we can see that is because that it is warping space, bending light and twisting magnetic fields around itself.”

In 2019, an international scientific team unveiled a landmark achievement in astrophysics – the first photo of a black hole.

Scientists said the shape of the shadow would be almost a perfect circle in Einstein’s theory of general relativity, and if it turned out that it was not, there was something wrong with the theory.