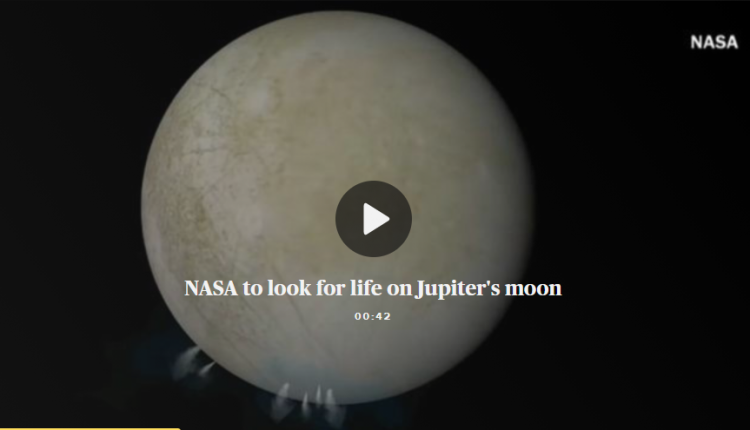 NASA’s Juno probe has flown closer to Jupiter and its largest moon, Ganymede, than any other spacecraft in more than two decades — and the images it beamed back of the gas giant and its icy orb are breathtaking.

Juno approached Ganymede on June 7, before making its 34th flyby of Jupiter the following day, traveling from pole to pole in under three hours.

On Thursday, NASA released an animated series of images captured by the spacecraft’s JunoCam imager, providing a “starship captain” point of view of each flyby. They mark the first close-up views of the largest moon in the solar system since the Galileo orbiter last flew past in 2000.

The time-lapse animation lasts three-and-a-half minutes, guiding space enthusiasts within 645 miles of Ganymede at 41,600 miles per hour. The images show the lighter and darker regions of the moon, believed to be the result of ice sublimating, transitioning from a solid to a gas state.

Also visible is the crater Tros, one of the largest and brightest crater scars on the moon.

The animation then travels to Jupiter, a 735,000-mile journey from Ganymede that takes Juno 14 hours and 50 minutes. Viewers are brought within 2,100 miles of Jupiter’s famous clouds, as the planet’s powerful gravity accelerates the probe to nearly 130,000 miles per hour.

Visible from that perspective are the cyclones at the gas giant’s north pole, as well as five “string of pearls” — gigantic storms spinning in the southern hemisphere, appearing as white ovals.

“The animation shows just how beautiful deep space exploration can be,” Scott Bolton, principal investigator for Juno, said in a statement. “The animation is a way for people to imagine exploring our solar system firsthand by seeing what it would be like to be orbiting Jupiter and flying past one of its icy moons. Today, as we approach the exciting prospect of humans being able to visit space in orbit around Earth, this propels our imagination decades into the future, when humans will be visiting the alien worlds in our solar system.”

NASA’s animation team also simulated lightning that would be visible if you were actually viewing one of Jupiter’s thunderstorms in person. The camera’s point of view for the animation was generated by citizen scientist Gerald Eichstädt, using composite images of the planet and its moon.

“This is the closest any spacecraft has come to this mammoth moon in a generation,” Bolton said. “We are going to take our time before we draw any scientific conclusions, but until then we can simply marvel at this celestial wonder, the only moon in our solar system bigger than the planet Mercury.”