FIND OUT WHERE THE WORLD’S FASTEST 5G INTERNET SPEED IS

South Korea is the first in the world to launch a national 5G network and is leading the way in deploying next-generation networks. This country also allows users to fully experience all the benefits of 5G technology. This is because it has the fastest fifth-generation networks.

This is the conclusion reached by SpeedCheck analysts who analyzed the speed of 5G networks around the world. In their report, they point out that in South Korea, the Internet speed of the 5G standard is 449 Mbps. This figure means that users in this country understand better than others all the benefits that fifth-generation networks offer. Which is faster file downloads, faster gameplay in online games and a more immersive AR / VR experience.

Taiwan is in second place with a noticeable lag – 136.36 Mbps. The third place was taken by the United Kingdom with a result of 126.49 Mbps. The rating also includes such countries as Japan, Germany, Austria, Switzerland, Netherlands, Australia, Kuwait, Canada, France, Italy, Spain, USA and others. But for China, it has no place in the ranking, and this is despite the fact that 5G networks are being built there at an accelerated pace and the country is the leader in the number of 5G devices.

The report also compared the cost of 1 GB of mobile internet in South Korea and the United States. So, American users pay $ 1.5 for 1 GB, while in the Asian country – $ 2.3. But the higher cost in South Korea is offset by the high speed. 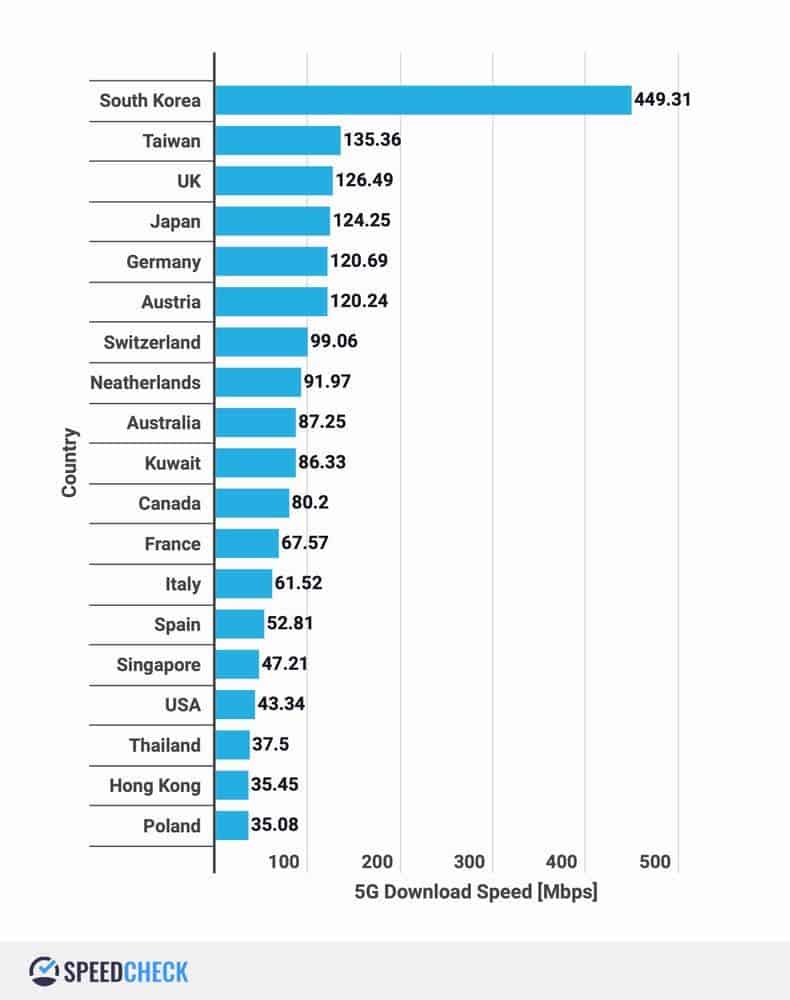 The share of 5G smartphones is growing inexorably; and everything is heading towards the fact that they will start to supplant solutions with support for 4G. So, according to Canalys analysts, this year 610 million smartphones operating in 5G networks will be delivered to the market; and their share will be 43% in the global market. Next year, the presence of such devices will increase and reach 52%.

Experts note that the market has stabilized and in the first quarter of this year there is an increase in demand for 5G smartphones. The share of devices with support for fifth generation networks reached 37% in the first three months of this year; and at the end of the year they will occupy 43% of the global mobile device market.

One of the reasons for the growing popularity of 5G smartphones is that more and more affordable models appear and by the end of this year, every third device will cost less than $ 300. More and more users are choosing 5G models and in some cases are doing so for the future in anticipation of the full-scale deployment of networks of the new communication standard.

In general, experts say that the market is recovering from last year’s crisis; and they expect that the supply of mobile phones will amount to 1.4 billion units. Against the background of 2020, an increase of 12% will be recorded.

8 Enterprise SEO Skills That Add Value for Your Team & Career