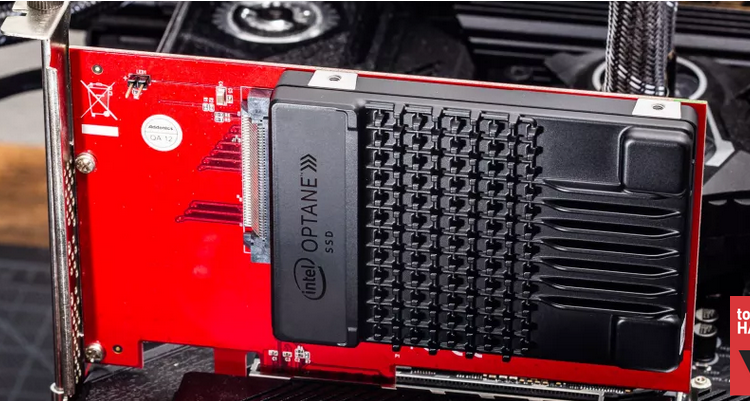 Intel Optane SSD DC P5800X is the fastest and most endurant NVMe SSD we’ve ever tested, easily beating any SSD on the market in both performance and endurance. But it’s pricey and has limited capacity, making it a niche product.

If you want the absolute fastest performance from your storage device, look no further than Intel’s Optane SSD DC P5800X. The P5800X delivers up to 7.2 GBps of sequential bandwidth and random performance that tops 1.5 million IOPS, easily beating all competing storage devices on the market. It’s even four to five times faster than the fastest flash-based NVMe SSDs at the all-important queue depth (QD) of 1, meaning that it provides the snappiest user experience money can buy.

Intel originally launched the P5800X as a pricey data center SSD and didn’t offer it to the consumer market, largely because the company had already killed off its entire line of Optane products for desktop PCs. However, after hearing feedback from storage enthusiasts, Intel reconsidered and made the P5800X available for anyone to purchase. But that comes with a few caveats: the P5800X is only intended for “workstation use” and carries a hefty price tag.

Intel’s previous-gen Optane SSD 905P was the company’s fastest SSD when it launched. Still, it didn’t provide PCIe 3.0 bus-saturating performance due to its controller design, and it hasn’t been the all-around best SSD for some time — particularly as new PCIe 4.0 SSDs became widely available. However, the DC P5800X delivers more bandwidth and performance in random workloads than its predecessor thanks to improvements to the controller coupled with a wider PCIe 4.0 interface and second-gen Optane media, making it easily the fastest drive money (a lot of it) can buy.

Intel’s Optane SSD DC P5800X comes in capacities of 400GB, 800GB, and 1.6TB. Ranging from $1,189 to $3,724, each is priced significantly higher than any typical flash-based SSD. With performance specs rated for up to 7.2/6.2 GBps of read/write throughput, the P5800X offers awesome sequential performance, addressing one of the key weaknesses of its predecessor. The DC P5800X also delivers up to 1.5 million random read/write IOPS, not to mention market-leading QD1 performance.

Intel backs the P5800X with a five-year warranty and also gives these drives the highest endurance ratings we’ve seen — up to 100 drive writes per day. For example, while a standard 1TB NVMe SSD is rated to handle 600 – 1,800 terabytes of writes, the 800GB P5800X is warrantied to handle a staggering 146 petabytes of write data. The 1.6TB model doubles that to a record 292 petabytes of endurance.

Intel supports the SSD with the company’s recently redesigned Memory and Storage tool. With it, you can monitor and diagnose the SSD and update the firmware if a newer version is available.

As a data center SSD device first and foremost, the DC P5800X comes in a more serviceable U.2 form factor, measuring 15mm thick, rather than a large Add-In Card (AIC) like the P4800X and 905P. The casing is solid aluminum and has fins integrated into its design to ensure proper cooling. Although Intel improved power efficiency on this new generation of Optane products, they still guzzle lots of power compared to standard consumer flash drives.

A PCIe 4.0 x4 NVMe Optane media controller, which we’ll refer to as the LNBF (as etched in its IHS), powers the drive. The LNBF controller is NVMe 1.3d-compliant, but the company says a firmware update could upgrade the device to NVMe 1.4. The controller supports AES 256-bit hardware encryption to ensure data security. It also comes with standard features such as S.M.A.R.T. data reporting capability and thermal throttle protection that kicks in when the device reaches or exceeds 70 degrees Celsius. Our sample also supports three power states (13W, 15W, and 17W) and multiple LBA sizes.

The LNBF’s higher channel count is a notable improvement over the previous generation SLL3D controller. While the SLL3D had up to seven channels, the LNBF scales up to eight channels for our 800GB model, and up to 12 channels for the 1.6TB model (The extra channels only impart minor performance improvements).

Intel optimized for single-sector reads, which makes it easier for small-file 512B transfers. Surprisingly, the controller only has a single-core ARM Cortex R7 CPU operating at up to 1.1 GHz. The drive lacks DRAM — it’s not needed with byte-addressable Optane media.

Intel’s second-gen Optane media is what makes the P5800X so special, but it’s also why it costs so much. With eight packages on the PCB, each containing four dies, our 800GB sample comes with a lot of fast and expensive 256Gb dies (half as many as the bigger 1.6TB model). That’s twice the die density of first-gen Optane media.

Intel scaled out to a four-deck design, up from just two decks with the first-gen media, which also helped to improve memory array efficiency. As a result, the number of bond pads per die has increased from 81 to 85, and the memory array efficiency increased from 57.8% to 67.4%. Intel shrunk the die size a little, too, from 206.5 mm2 to 195.6mm^2. This figure allows us to calculate the second generation Optane media’s bit density as 1.31 Gb/mm2, which is minuscule compared to today’s high-layer count NAND flash that can measure 10x that.

Which ASUS model supports Windows 11 and how to setup?