The Ultimate Guide to Softboxes: The Anatomy of Light Shaping Tools 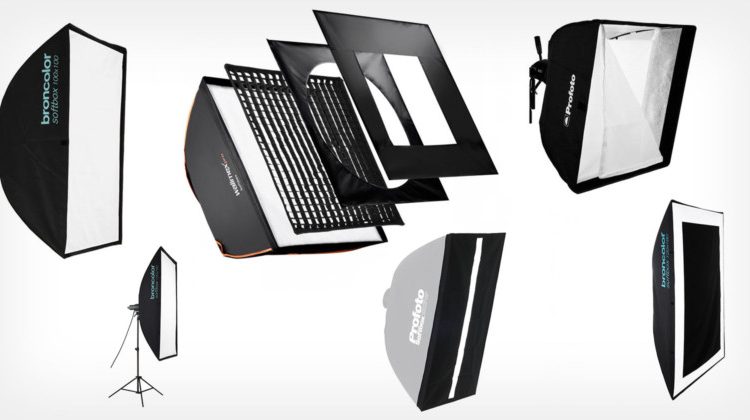 Softboxes are among the most popular light shaping tools. Few photographers have never shot with softboxes, and more often than not a softbox is a go-to modifier for beginners. In this article, I will break down the anatomy of a softbox, from physics to possible applications for it. Read on to become a master of using softboxes.

What Is a Softbox?

In the simplest terms, a softbox is a light modifier that is shaped like a box and produces soft light. Softboxes come in different shapes, with each one having a distinct function and look to them. Here are the most popular ones:

A square softbox will produce an even soft light that will have gradated shadow edges. A great use for a square softbox would be for creating soft window light since a softbox is shaped exactly like one. The square shape means that both horizontal and vertical shadows will be the same size.

One difference between this softbox and an octagonal one would be the catchlights. The sharp corner in the softbox will produce much more distinct pointy catchlights when compared to a round softbox. 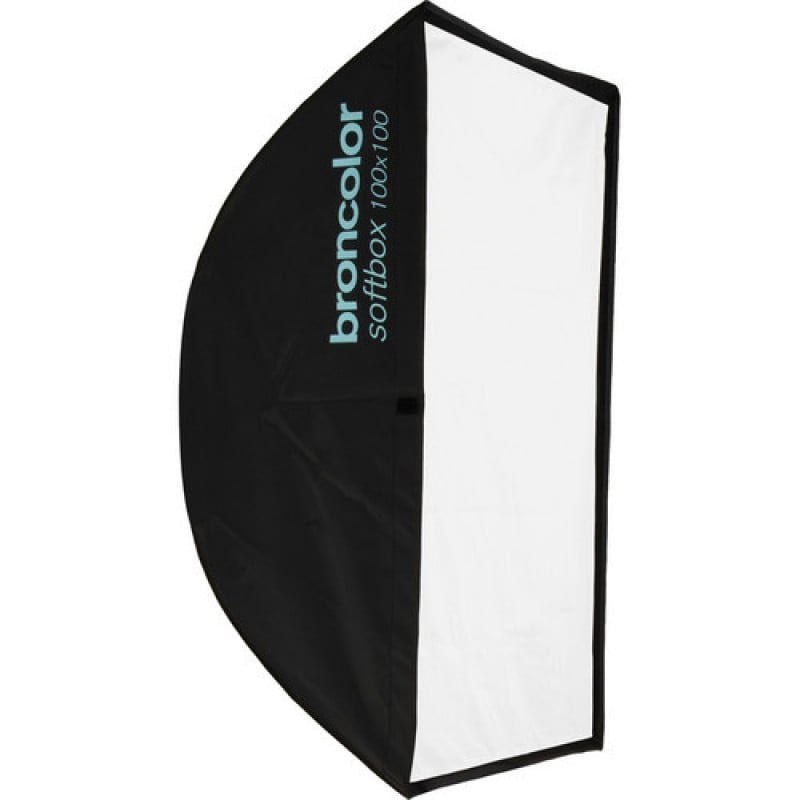 As one side gets smaller and the other bigger it will produce a somewhat narrower light spread. The light will cover a larger area on one side while covering a smaller one on the other. This shape is very popular among fashion and portrait photographers for it allows to light a half-body shot without spilling light on the background too much.

A word of caution: this softbox will create softer shadow edges on the larger side while creating harder edges on the smaller side. Nonetheless, if you’re using a 4×6 softbox to light a portrait that will be barely noticeable, this will be predominantly seen when using a smaller softbox on longer distances. 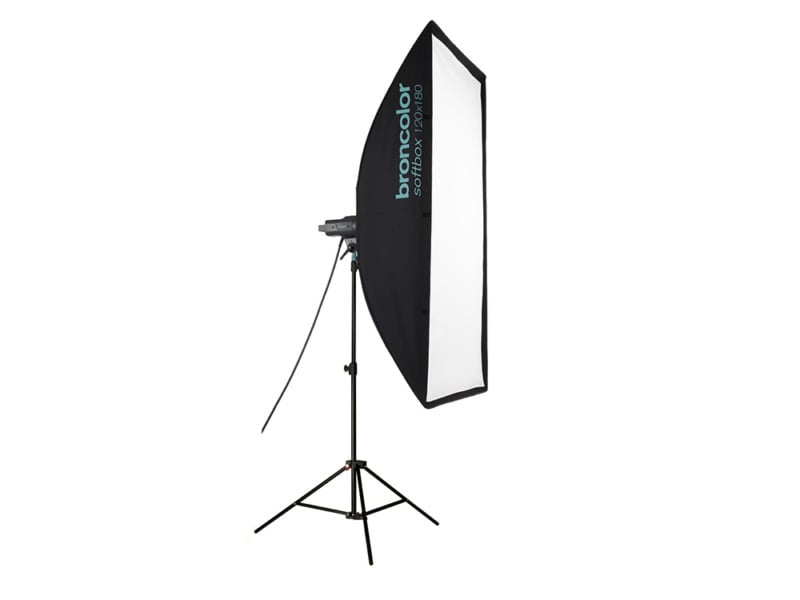 A stripbox is often used for full-body shots as it covers the whole body on one hand while giving a lot of definition and contrast on the other. A cautious photographer will be wary of using a long stripbox with a flat-end flash as there is a 1-3-stop difference between the center and edge of the modifier. 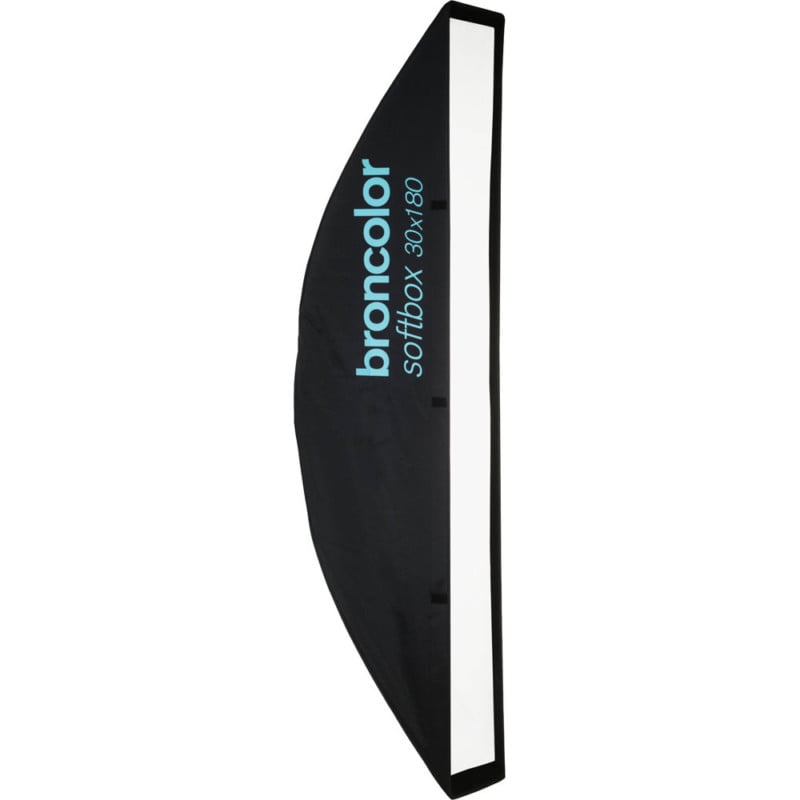 A classic among softboxes, the octagonal softbox is preferred to the square one for the round catchlights in the eyes. For all intents and purposes, it gives off a very similar, albeit slightly rounder and wider, light as a similarly sized square softbox. 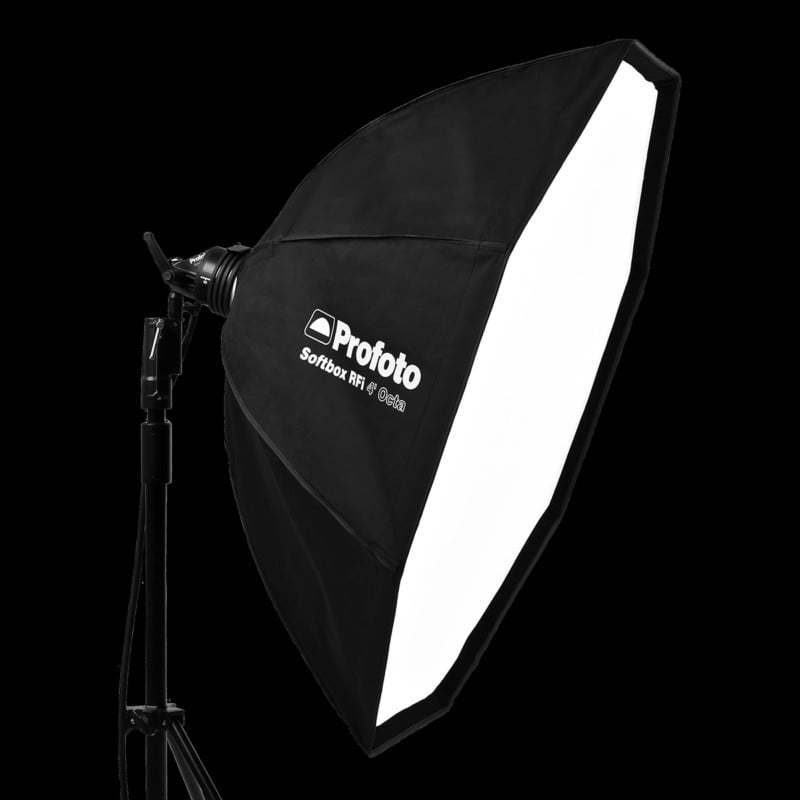 It has become quite popular nowadays to purchase deep softboxes because they give an unusual light. However, a deep direct softbox is no different than an octabox. An indirect parabolic softbox, on the other hand, is very useful but it won’t be discussed in this article. 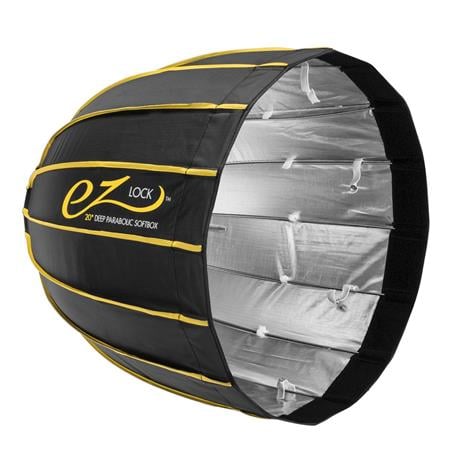 Accessories For a Softbox

A softbox isn’t complete without accessories, here are some common ones that you can put on most softboxes:

Softbox grids often are 50deg, meaning that they limit whatever light spread the softbox has (often 180deg) to a much finer one. This, however, makes the light harder.

Soft light is defined as a light that hits the subject from a large family of angles which causes the shadow edges to be gradated. Since the grid limits that family of angles, the light becomes slightly harder. Often it is advised to move the softbox closer to compensate for this. 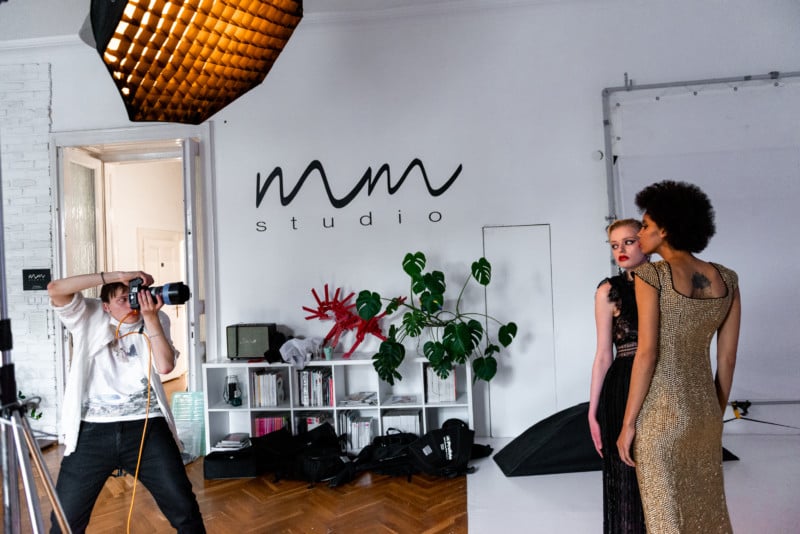 Stripmasks are made primarily for stripboxes. They make the edge finer and the light source smaller (in one dimension) This can be useful when trying to create fine reflections or horizontally hard but vertically soft light. A common use for a stripmask is on automotive photography when long but fine highlights are required. 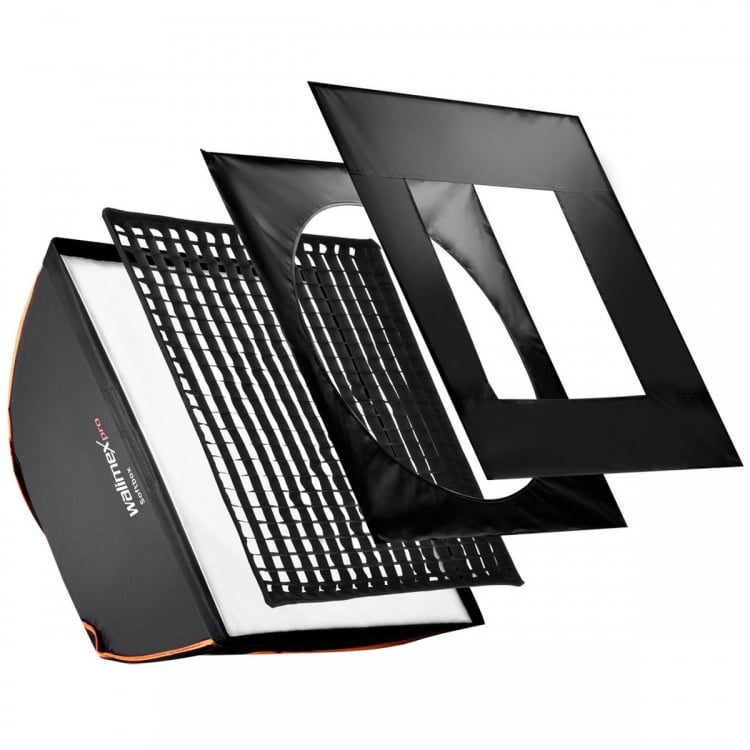 There are also custom masks that exist for softboxes. Some will block out the center, while others can be customized. In fact, you can make your own softbox masks by creating custom gobos or using flags. The way you mask your softbox is just a matter of imagination. 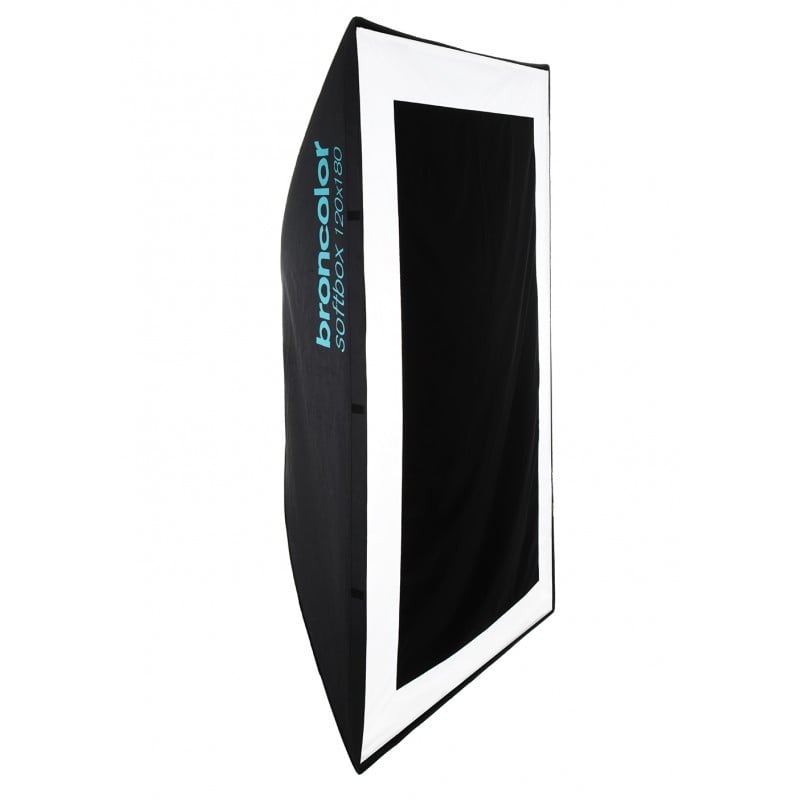 How Does a Softbox Work?

The principle behind every softbox is that it produces a light that hits the object from a wide family of angles. This is achieved by taking the point light source and reflecting it inside the modifier first through the first and then the second diffuser.

The role of the first diffuser is to take the direct specular rays and modify the angles at which they travel. However, with particularly large softboxes, this will still leave a hotspot in the middle. Often the difference between the center and side is 2-3 stops. This is unwanted, so a second layer is necessary.

The second diffuser further diffuses the light, which produces a much more even corner to corner illumination. The distance between the two layers of diffusion is relatively unimportant, but if you fancy diffusing the light even further you can shoot the softbox through a scrim placed a meter or so from the softbox. 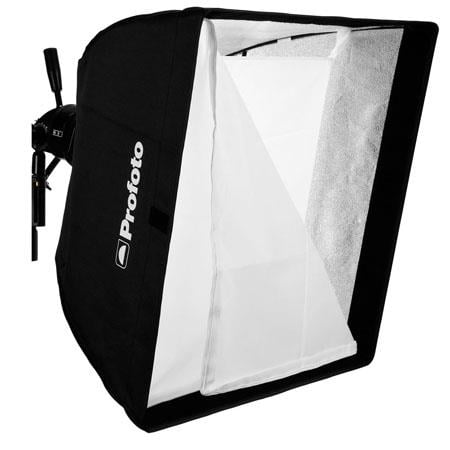 I couldn’t possibly list all uses for a softbox, as it is a very versatile and popular modifier. Here are some common places and setups where a softbox will be appropriate:

Being a soft and often large light source, a softbox is ideal for creating portrait light. The soft quality of light of it ensures that skin texture appears smooth, while the large size ensures that the coverage is sufficient for even illumination. A softbox placed at 45deg to the subject will produce a classic portrait light.

A classic softbox might not be as useful here, but a strip box is. It will be perfect for lighting a full body shot of an athlete vertically while keeping the punchy quality of light horizontally. The hard light will bring out the muscle and other detail in the subject.

Most cars have long lines that define their shape. Bringing out that shape with a directed long strip of light will be pleasant for the viewer as it shows the essence of the subject.

One of the most important ingredients in a successful product image is good highlights and direct reflections management. A softbox will be useful when trying to create even linear highlights. Another use would be as a fill source, or as a source of even diffused light which is great for bringing out the color in images.

Fashion photography is another common place for softboxes. As it produces a soft diffused light it is flattering for models’ faces which reduces the amount of retouching required. Moreover, a softbox is used to light certain fabrics such as ones that produce diffused reflections (wool or cotton).

You can choose your own brand of the softbox, however, I will strongly recommend going with a quality brand such as Elinchrom, Broncolor, or Profoto. Their modifiers are durable and worth it in the end.

Read also: Are Expensive Light Modifiers Worth It?

Here are some sizes that will be useful for your studio setups:

Doubles up as a key portrait light.

Picking the right softbox is difficult. Hopefully, this guide has been helpful in showing you the uses for each one. Personally, I use softboxes here and there but they are not instrumental to my work. The same can be said about every other modifier. What is crucial is the theoretical and practical knowledge of light that pays a dividend in the form of being able to charge more.

I strongly suggest deepening your knowledge by exploring light just by using one modifier. Pick up a softbox that is most interesting for you and dive deep into exploring it. Have fun!