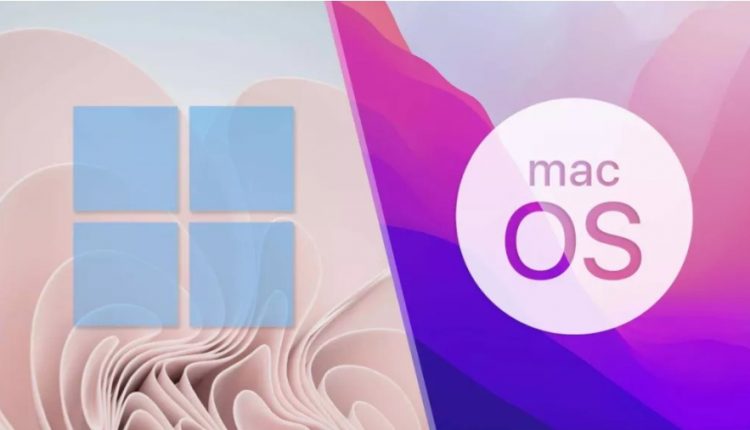 As a Mac user it’s hard for me to look at Windows 11 and not be jealous. Just look at what Microsoft has unveiled here. The multitasking runs circles around macOS Monterey, and I prefer the new Start menu and taskbar to the macOS dock.

The docking features of Windows 11 also looks superior to macOS, and I like Microsoft’s more flexible approach to widgets. And while the Windows Store has been a mess up until now, the addition of Android apps in Windows 11 looks like a big deal.

Here are 5 ways Windows 11 beats the latest macOS Monterey based on the features announced thus far.

With macOS you can work with two apps side by side — and that’s it. Windows 11 introduces a new Snap Layouts feature that lets you run up to three apps side by side and choose from a bunch of other layouts, such as a 2×2 grid for four apps or on on the left and two on the right.

You can also create Snap Groups in Windows 11 that you can park right in the taskbar, so you can pick up right where you left off after you answer that notification.

While Apple refuses to bring touch to the Mac and keeps pushing the iPad Pro, the best 2-in-1 laptops running Windows 11 will get improved touch support. You’ll see more space between the icons, larger touch targets and visual cues for sizing and moving windows. The onscreen keyboard is getting better, too.

In addition to having easy access to the awesome Xbox Game Pass, Windows 11 is offering a few key gaming upgrades that will take the best titles to the next level. DirectX 12 support brings better high-frame rate gaming, while Auto HDR will deliver better visuals in a wide range of games.

In addition, if you have a PC that supports DirectStorage, you should enjoy much faster game load times. (Think Xbox Series X in PC form.) macOS is still miles behind on gaming, with so many fewer titles than Windows.

Whether you’re working from home and you move from room to room or you’re in an office setting, many of us are constantly docking and undocking. But it can take a bit to spring back into action. Windows 11 has a new docking experience that I wish macOS had.

If you unplug a laptop from a dock to move rooms, the windows that were on your monitor will minimize in Windows 11. When you come back and then re-connect to a dock, all of your Windows will re-appear the way they were before.

The Microsoft Store has not been the best during the Windows 10 years, but it’s getting a lot better with Windows 11, with a store that’s a lot more open than macOS’ walled garden. For example, Microsoft is letting developers use their own commerce engines, like Adobe, so it’s not going to force devs into giving Microsoft a cut.

In addition, Android apps are coming to the Windows Store, which on paper is good. However, you’ll be limited to the options in the Amazon App Store. You may be able to sideload apps in Windows 11, but we wouldn’t recommend it. We’ll have to see how good the selection is come this fall, and how good the implementation is.

FaceTime on macOS Monterey looks a lot cooler than the new Chat from Microsoft Teams, which is built into Windows 11. That’s because FaceTime has a new SharePlay feature that lets you watch moves and shows with friends or listen to music. But if you’re on Android or Windows, you can only be seen and heard through a web link, as there’s no dedicated FaceTime app for those platforms — which means they won’t get SharePlay. Chat with Microsoft Teams will be available on Windows, Android and iOS.

There’s lots of things that I like about macOS better than Windows. AirDrop continues to be one of my favorite features, and I like that my messages from iPhone automatically appear on the desktop (something only Android owners could do on Windows). In addition, macOS updates are generally much smoother, whereas Windows 10 has had all kinds of problems, several of which have resulted in severe bugs or blue screens of death. Microsoft says Windows Updates will improve in Windows 11, and we’ll wait to se that when it happens.

macOS Monterey, launching this fall, promises several other welcome upgrades. These include a much improved FaceTime, a redesigned Safari with handy Tab groups, Quick Notes and more seamless integration with the iPad with Universal Control. But if you’re in the Windows camp — or you’re thinking about switching — Windows 11 has macOS beat in several ways at this early stage.

Correction: The app store section of this article incorrectly stated the Apple store. It should have said Microsoft’s Windows store. We regret the error.

WINDOWS 11 WILL LEAVE MILLIONS OF PCS BEHIND, AND MICROSOFT IS STRUGGLING TO EXPLAIN WHY