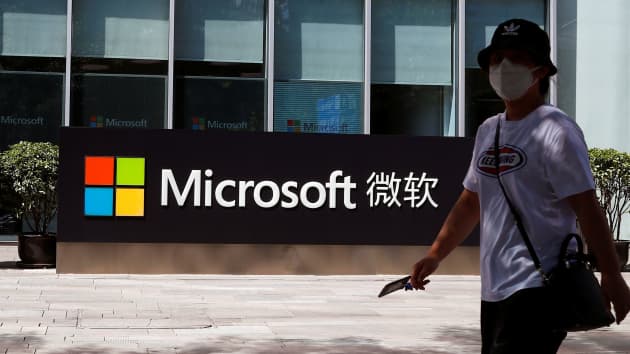 The deal marks Microsoft’s latest foray into a retail industry that is being forced to accelerate a shift online. The integration of offline with internet-based sales strategies is known as omni-channel retail, and includes grocery delivery, demand for which surged in the wake of the coronavirus pandemic.

Retail is one of the industries that’s seen some of the biggest disruptions in recent years, Joe Bao, China strategy officer for Microsoft, said at a signing ceremony at the software company’s Beijing offices.

The partnership is not just for the China market, but also for bringing China’s technology overseas, Bao said in Mandarin, according to a CNBC translation. He said the agreement comes after five years of Microsoft working with Hanshow.

The American software company entered China in 1992, where it has its biggest overseas research and development center. The strategic partnership comes as U.S. and Chinese companies operate in an increasingly tense political environment that has focused on trade and technology, partly in response to longstanding foreign criticism about unfair Chinese business practices.

WATCH NOW
VIDEO03:49
Saks CEO on the state of the consumer amid reopening

The company says its products include electronic store shelf labels that can reflect price changes in real time, and a system that helps workers shorten the time it takes to pack produce for delivery. Hanshow says it also sells a cloud-based platform that allows a retailer to simultaneously see the temperatures of fresh produce in stores around the world.

The partnership will include collaboration on internet-connected, or internet of things, technology.

As part of the deal, Hanshow will use Microsoft’s Office 365 software such as Word, and Dynamics 365, a cloud-based customer relationship management system, said Gao Bo, chief architect at Hanshow, told CNBC in an interview following the signing ceremony. He said the two companies can share their global client network and will jointly launch a research and development team.

Founded in Beijing about a decade ago, Hanshow lists offices in Germany, France, the Netherlands, Denmark and Australia on its website. Hanshow has just established a branch in the U.S., according to the company.

Globalization is one of Hanshow’s important business strategies, Gao said in Mandarin, according to a CNBC translation. He claimed that the company’s first step when entering a foreign market is to understand local laws and culture, and that his own work hasn’t been significantly affected by international trade tensions.

“Offline stores aren’t going to die out,” Gao said, adding that “the uncertainty in the future is what the ratio will be.”