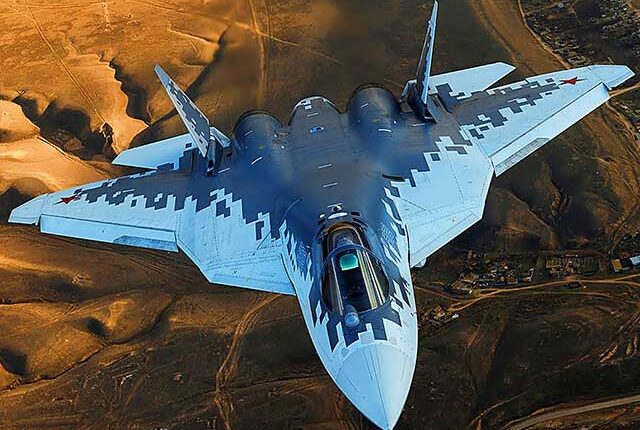 Russia is building new production facilities for the serial production of its Su-57 stealth fighters. Russian sources report that the new production assembly lines have been opened at the Komsomolsk-on-Amur aviation plant in the Far East.

The Su-57 has been in serial production for at least two years, but so far only about 10 units have been built. Russia expects to receive 76 Su-57 Felon units, according to the signed agreement between the Russian Federation and Rostec. Vladimir Artyakov, the first deputy general director of Rostec, announced recently that “the new facilities of the KnAAZ flight test station should receive the first aircraft” in the second half of next year.

The Russian site Voennoe Delo [Military Affairs in English] says the new manufacturing will increase the quality of the series-produced fighters as well as their stealth capabilities. The new plant will have modern technologies that will be competitive with those in China and the USA, says Voenno Delo.

However, the other flagship of Russian aviation, the Su-35, will not be produced at the new plant. According to people familiar with the matter, the Russian Federation plans to end production of the Su-35 in 2027 and focus on serial production of the Su-57 and Su-75, both for the domestic and international markets. There is no word on whether the Su-70 Okhotnik [the unmanned attack drone] will be produced on the production lines of the new production facilities planned to open.

Voenno Delo says that the plant in Komsomolsk on Amur in the Far East will also install the latest engines, long expected by the Russian Air Force. It is about the notorious Izdelie 30 engine, which will bear the trade name Saturn 30. The new plant will also carry out assembly work on the Su-57 on electronic warfare and laser protection systems.