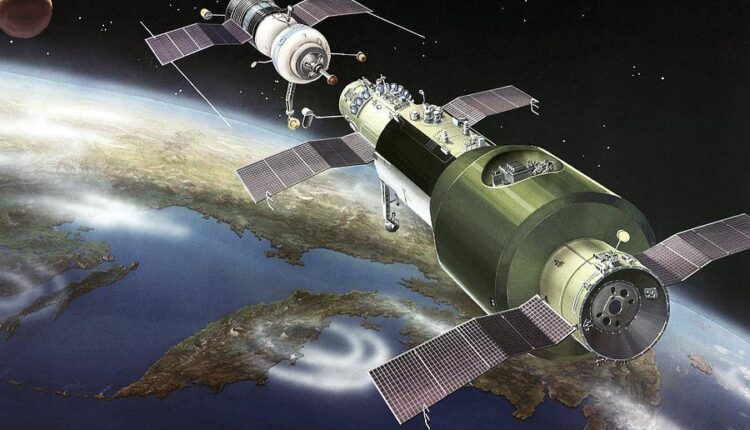 History was made in 1971 after the Soviet Union placed the world’s first space station, Salyut, in orbit, laying the foundation for present-day space stations like the International Space Station (ISS) and China’s Tiangong.

However, the US interrupted this winning spree of the Soviet Space program by putting humans on the moon for the first time with its Apollo 11 mission on July 20, 1969, only seventeen days after the Soviet Union’s second N1 lunar launch vehicle blew up.

This ended the ‘Moon Race,’ prompting the Soviet Union to hunt for a bigger prize and decided to build the world’s first civilian Earth orbital space station.

In 1966, the Soviet Union began working on a secret military space station program called ‘Almaz’ with the first launch planned in the early 1970s. Almaz was supposed to be a 20-ton module regularly visited by crews of two to three cosmonauts traveling on ‘Soyuz’ crew transport spacecraft.

However, after losing the Moon race, it was decided that the Almaz spaceframe would be repurposed for a civilian space station weighing 18 tons that could be launched using a Proton Universal Rocket-500K (UR-500K).

The idea was to take the Almaz’s spaceframe, install Soyuz systems such as orbital maneuvering engines and solar arrays onto it, and create a new docking tunnel with a hatch to reach the interior.

The work on the space station began in February 1970 at the facility, now known as RKK Energia in Kaliningrad, present-day Korolev, outside of Moscow. The final module was ready by February 1971, when it arrived at the Baikonur Cosmodrome in Kazakhstan for final testing and outfitting before the launch.

While initially designated as Zarya, it was renamed Salyut during a pre-flight readiness review ten days before the launch to avoid conflict with China, which was developing a spacecraft with the same name.

It would also help in avoiding any confusion during communications sessions with the Soviet Flight Control Center that used Zarya as its radio call sign.

Finally, on April 19, 1971, the Salyut 1 was lifted off using a three-stage UR-500K that successfully delivered the world’s first space station into orbit.

The space station measured 20 meters in length and weighed over 20 tons, providing 3,500 cubic feet of habitable volume. It had dining and recreation areas, food and water storage, a toilet, control stations, exercise equipment, and scientific equipment.

The total scientific equipment weighed 1.3 tons and included experiments to study human adaptation to long-duration spaceflight, various telescopes for solar and astronomical observations, and instruments to observe the Earth.

Two days after the Salyut-1 took off, Soyuz 10 was also launched, carrying a crew of three cosmonauts to the space station with the plan to stay in space for 30 days, but upon reaching the station, the cosmonauts could not dock with Salyut 1 due to problems with its hatch.

The crew was forced to turn around because of limited supplies aboard their spacecraft, and it returned to Earth the next day, making a rare night landing in Kazakhstan.

Following the failure of the Soyuz 10 mission, Soviet engineers redesigned the docking probe and updated dock procedures to fix the problem faced by the first crew. On June 6, 1971, a crew of three cosmonauts was again ferried by the Soyuz 11 mission to the Salyut 1.

This time, the crew successfully docked with the Salyut-1 module and entered into it, following which they remained on board for 383 orbits for 24 days, setting a new space endurance record.

During this time, the three cosmonauts conducted a series of experiments in astrophysics, biology, Earth observations, and technology and studied the effects of long-term weightlessness on themselves.

On June 29, the crew began their return trip to Earth onboard the Soyuz 11 but met with a tragic death due to the sudden depressurization of their spacecraft, as the Cosmonauts at the time did not wear suits while in flight.

Following the accident, the Soviet engineers redesigned the Soyuz spacecraft, and several changes were made to Soviet Policy. However, these changes could not be adopted while Salyut 1 remained in orbit.

Therefore, all further trips to the space station were canceled, and the controllers commanded the station into a destructive re-entry over the Pacific Ocean on October 11, 1971, marking an end to its 175-day extended stay in space.

The Soviets verified their new Soyuz spacecraft design through a six-day uncrewed test flight in June 1972, and in the next month, they attempted a launch of the second Salyut, a twin of the first space station. However, one of the Proton rocket’s second-stage engines failed, and the Salyut-2 could not make it to orbit.

The Soviet engineers had also already begun work on the next generation Salyut space station, which had better power generation capabilities than its predecessor due to the addition of three larger steerable solar panels mounted on the midsection that could track the sun without the need for rotating the entire station.

The first second-generation Salyut lifted off on May 11, 1973. However, a series of errors in one of its altitude control thrusters kept the station from reaching orbit. To hide its true identity, the Soviets designated it as Kosmos 557. The station re-entered the Earth’s atmosphere 11 days after its launch.

After a series of failures, the Soviets were finally able to successfully place their second new generation station, Salyut 4, in December 1974. Two crew members were sent to the station in 1975, who spent 30 and 63 days in space, respectively, setting new Soviet space endurance records and conducting science experiments.

Following this, two third-generation stations, Salyut 6 and 7, were launched in 1977 and 1982, respectively, which had a second docking port, allowing the space stations to be resupplied by unmanned Progress cargo vehicles, giving the stations a much longer life span that enabled the Soviets to extend their stay up to eight months.

The Salyut-7 space station famously died in February 1985 when all of its systems were shut down because of power loss. A daring rescue mission was launched on June 6, 1985, which consisted of two cosmonauts, Vladimir Dzhanibekov and Viktor Savinykh.

The loss of power also led to heat loss in the station’s interior, with the temperature dipping to –4 degrees Fahrenheit (–20 degrees Celsius).

Under such harsh conditions, Dzhanibekov and Savinykh worked relentlessly, going one by one, reviving the lights, communications, water storage, delivery apparatus, etc., and managed to bring Salyut-7 back to life in mere ten days. After that, the station remained in space until 1991.

Salyut-7 was the last of the Salyut series of space stations. It was followed up with the fourth-generation module featuring six docking ports that became the Base Block of the ‘Mir’ space station.

It hosted 104 visitors from 13 countries and included seven astronauts from the US as part of the Shuttle-Mir Program.

The Mir space station had a 15-year life span and increased the human spaceflight duration record to 14 months.

Meanwhile, the US also launched its first space station, Skylab 1, on May 14, 1973, just three days after a failed attempt by the Soviets to place their first second-generation Salyut station in orbit.

The Skylab-1 weighed 84.5 pounds and had an overall habitable volume of 12,417 cubic feet. It included a pressurized workshop, an airlock, and a host of telescopes. The station suffered significant damage during the lift-off, which endangered the entire program.

On May 25, 1973, the first crew of three astronauts was lifted off to visit the station, and it spent 28 days, breaking the 24-day space endurance record set by the Soviets during the Soyuz 11 mission to the Salyut-1. During this time, the crew repaired the space station and conducted valuable research.

The second crewed mission was launched on July 28, 1973, that went on to set a new endurance record of 59 days, during which the astronauts undertook further repairs and conducted more research.

The third and final crewed mission followed this on November 16, 1973, which was also the longest, setting a record of 84 days, during which the crew carried out an unprecedented amount of research.

The Skylab finally re-entered the Earth’s atmosphere in July 1979.

In 1984, the 40th US President, Ronald W. Reagan, directed NASA to develop and build a permanent Earth-orbiting space station and called for international participation in the project, which culminated in the International Space Station (ISS), which involved participation from the US, Russa, Canada, Japan, and the European Space Agency.

Russia’s contribution to the ISS is the Zvezda Service Module, launched in 2000, which allows the permanent human occupancy of the station. It was a backup module for the Base Block of the ‘Mir’ space station.

Even China, banned by the US from participating, went on to build its own Tiangong 1 and Tiangong 2 space stations, launched in 2011 and 2016, respectively, becoming the only country to operate its own Space Station in the post-Cold War era.