It's too soon to tell where the 25-ton piece of space junk will come down. 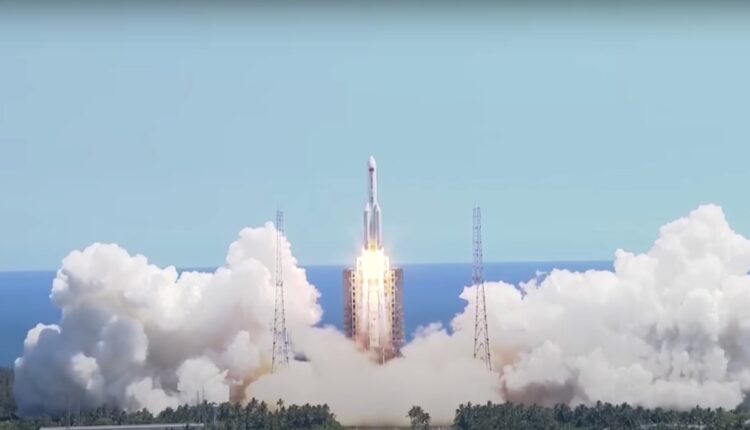 The newest piece of big Chinese space( rocket) junk will fall back to Earth around the end of the month, experts predict. The object in question is the roughly 25-ton (22.5 metric tons) core stage of the Long March 5B rocket that on Sunday (July 24) launched to orbit the second module for China’s under-construction Tiangong space station.

The rocket body will likely stay aloft for about a week, according to researchers with The Aerospace Corporation’s Center for Orbital Reentry and Debris Studies (CORDS). They’ve analyzed tracking data gathered by the U.S. Space Force’s Space Surveillance Network and predict that the rocket body will reenter Earth’s atmosphere around 3:30 a.m. EDT (0730 GMT) on July 31, plus or minus 22 hours.

That forecast will be updated and fine-tuned as time goes on. It’s too early to predict where the Chinese rocket will come down, CORDS researchers stressed(opens in new tab). Based on its orbit, however, we know reentry will occur somewhere between 41 degrees north latitude and 41 degrees south latitude. And not all of the object will burn up in Earth’s air.

“The general rule of thumb is that 20-40% of the mass of a large object will reach the ground, but the exact number depends on the design of the object,” The Aerospace Corporation wrote in an explainer about the impending rocket fall(opens in new tab). “In this case, we would expect about five to nine metric tons [5.5 to 9.9 tons].”

The core stages of most orbital-class rockets are designed to come down shortly after liftoff, steered safely into the sea or over sparsely populated sections of terra firma — or to make powered, vertical landings to enable reuse, as SpaceX’s Falcon 9 and Falcon Heavy first stages do. But the Long March 5B core reaches orbit along with its payload, setting up an uncontrolled crash back to Earth, caused by atmospheric drag, in the not-too-distant future.

We saw such undirected dives on the two previous Long March 5B missions. (The rocket has now flown a total of three missions.) The rocket debuted on May 5, 2020. About a week later, a Long March 5B body came down in an uncontrolled manner off Africa’s west coast, apparently dumping some debris(opens in new tab) in the nation of Ivory Coast. The second Long March 5B reentered over the Indian Ocean in May 2021, 10 days after launching Tiangong’s core module, which is known as Tianhe.

In addition, Tiangong 1, a prototype space lab that helped pave the way for the Tiangong space station, crashed back to Earth over the Pacific Ocean in April 2018.

None of these incidents caused any reported injuries. But the potential for injury and damage to infrastructure on the ground has spurred exploration experts to rebuke China for allowing such space junk falls to occur.

“Spacefaring nations must minimize the risks to people and property on Earth of reentries of space objects and maximize transparency regarding those operations,” NASA Administrator Bill Nelson wrote in a statement(opens in new tab) posted shortly before Tianhe’s Long March 5B body came down last year.

“It is clear that China is failing to meet responsible standards regarding their space debris,” Nelson added. “It is critical that China and all spacefaring nations and commercial entities act responsibly and transparently in space to ensure the safety, stability, security and long-term sustainability of outer space activities.”

The Tiangong space station will ultimately consist of three modules. China is expected to launch the third and final module on a Long March 5B this fall.