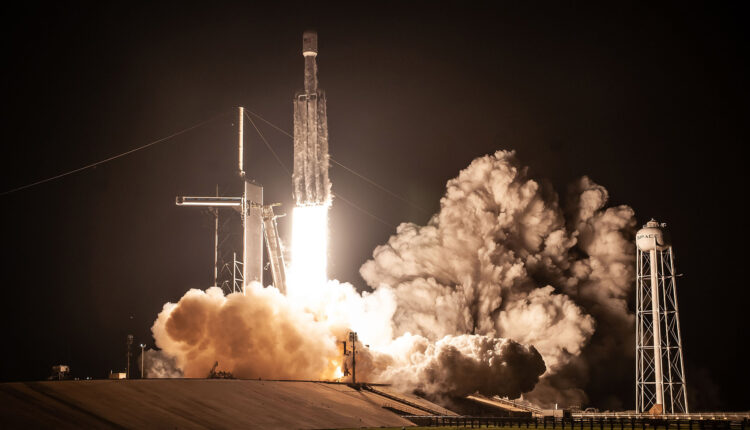 WASHINGTON — NASA has selected SpaceX to launch the Nancy Grace Roman Space Telescope on a Falcon Heavy, but at a price significantly higher than most previous agency contracts.

NASA announced July 19 that it awarded a contract to SpaceX to launch Roman on the company’s Falcon Heavy rocket in October 2026 from the Kennedy Space Center in Florida. The contract is valued at $255 million for the launch and other mission-related costs.

Roman is the next large, or flagship, astrophysics mission after the James Webb Space Telescope. The spacecraft features a 2.4-meter primary mirror, donated to NASA a decade ago by the National Reconnaissance Office, with a wide field instrument and a coronagraph to conduct research in cosmology, exoplanets and general astrophysics.

The spacecraft, with a mass of about 4,200 kilograms, will operate from the Earth-sun L-2 Lagrange point, a region of space about 1.5 million kilometers from the Earth in the direction away from the sun. That is the same location that JWST and several other astrophysics missions operate.

SpaceX offers the Falcon Heavy at a commercial list price of $97 million. The company increased that price earlier this year from $90 million, citing “excessive levels of inflation.”

SpaceX may have had no competition for the Roman launch. Tory Bruno, chief executive of United Launch Alliance, tweeted in February that his company was not bidding on the launch. His company’s Vulcan Centaur has yet to make its first launch. Blue Origin’s New Glenn also has yet to launch.

Roman is a key mission for NASA not just for science but also program management. Previously called the Wide Field Infrared Survey Telescope (WFIRST), the mission is the top priority flagship mission from the 2010 astrophysics decadal survey. The most recent decadal survey, published in November 2021, concluded Roman “remains both powerful and necessary for achieving the scientific goals” set forth in the earlier survey.

Despite early challenges and several agency budget proposals that sought to terminate the mission, Roman has continued development. Last year, though, the mission suffered a seven-month launch delay and $382 million cost increase that the agency blamed on the effects of pandemic. The mission now has a total lifecycle cost of $4.32 billion.

A Government Accountability Office assessment of major NASA programs published in June warned of the potential for further delays in Roman, citing issues with the spacecraft’s primary mirror assembly and restraint release actuators.

Keeping Roman on schedule and within budget is critical, agency officials said, to build up confidence that it can manage large science missions after the significant cost and schedule overruns with JWST. Only then, they argue, can NASA pursue large space telescopes like those endorsed by the latest astrophysics decadal survey, such as a six-meter space telescope for observations in optical, ultraviolet and infrared wavelengths.

“Number one on the priority list is to make sure that the Roman Space Telescope is delivered within our cost and schedule commitments,” Paul Hertz, director of NASA’s astrophysics division, said at a meeting of the American Astronomical Society in June.

“Unless NASA can show that we have learned lessons from the mistakes that were made in the management of the James Webb Space Telescope program and we can show that we can apply those lessons to another very expensive, very difficult great observatory, like the Nancy Grace Roman Space Telescope, nobody will take us seriously,” he argued.