Phoebe Gates, the daughter of Bill Gates, is rumored to be seeing a Black man, sparking discussions on social media regarding interracial and interclass dating.

The rumors of the presumed romance started after Phoebe, 19, shared a photo of herself and a young man on her Instagram account. The picture shows the young man kissing Phoebe on the cheek, with two red heart emoji at the bottom right-hand corner. 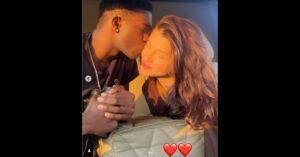 Although it is unclear if the couple is indeed dating or who the young man is, users on social media have speculated that the young man is on the come up for being associated with the daughter of Bill Gates.

Bill Gates is currently the second richest man in America, with over $124 billion net worth.

The news about the alleged couple was humorous to many users, who believed the young man would become wealthy by dating Bill’s youngest daughter.

Phoebe often uses her platform to speak on women’s health, including recently displaying her opposition to the “Roe v Wade” ruling. The Gen-Zer took a full-body photo of herself in a white bikini on her Instagram, saying that she isn’t shy about her body and every person deserves access to reproductive health care.

“I’m not shy about my body and/or telling you to keep your bans off of it,” Phoebe said. “Every person deserves access to sexual and reproductive health care. Right now, the Supreme Court is prepared to end the constitutional right to abortion. Join me and millions of other women in our fight for this basic human right. @PlannedParenthood #BansOffOurBodies.”

Although Phoebe has been mum about her reported lover, it is clear from her views on overturning Roe v. Wade that she is concerned about social issues.

The World’s Thinnest Mechanical Watch Is No Thicker Than a Quarter and Costs $1,888,000

Saved by the Bill: What if… Microsoft had killed Windows 95?