Satellitemap.space has a real-time view of the Starlink low earth orbit satellite constellation. Each dot is a Starlink satellite. You can see how many are over any particular country or region.

There are some string of dots. Those are recent launches that still have to move to their final positions.

Starlink is currently serving mainly North America and have about 500,000 customers.

Nearly 80% of users to date are located in North America, with another 18% in Australia, New Zealand, and Europe. Just 2% of Starlink users live in the rest of the world.

Starlink is permitted to operate in about 25 countries. There are bureaucratic and regulatory delays getting permission to sell and provide services in countries like India. 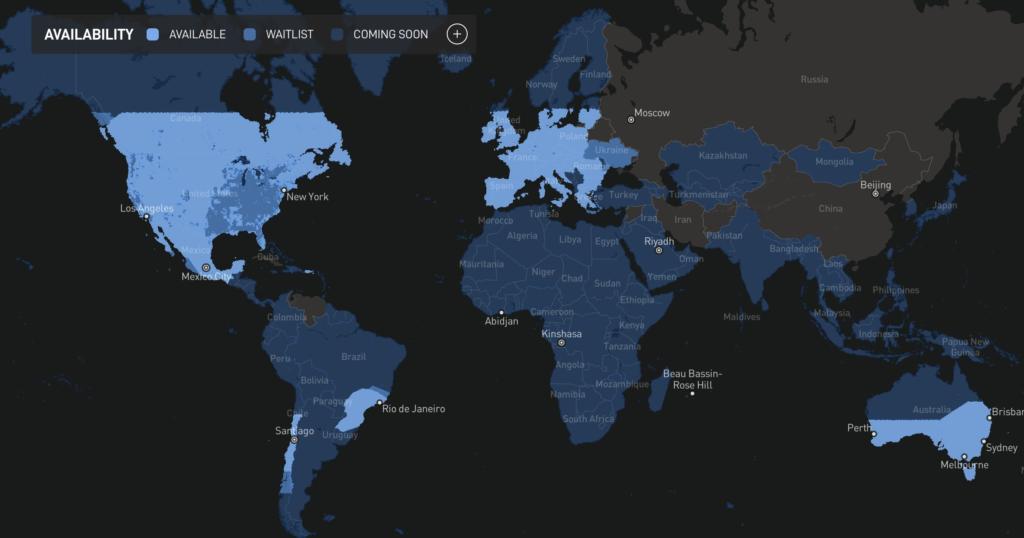 India’s permitting process has bogged down. If this turns and India permits Starlink to operate then they were expecting 200,000 users as fast as they could be provisioned.

There are many rural and underserved areas in Africa, India, South Asia and South America. There could be a very large number of users in those areas as Starlink is completely built out.

There are about 26,000 active commercial passenger jets.

A private yacht captain based in the Caribbean started using Starlink last year because the price was so much lower than the up to $6,000 per month he had paid for commercial internet on the open sea.

In 2016, it was estimated that there were about 10,000 luxury yachts 79 feet in length in the world – 20 percent of them were sailing yachts. There are around 22,000 private jet aircraft in operation around the world.

In 2021, there are 314 cruise ships operating worldwide, with a combined capacity of 537,000 passengers. There are also hundreds of navy ships. Each large ship could use several Starlink dishes to provide service to crew. There is a limitation on how many can be used. A ship by itself in the ocean could have exclusive use of a satellite. This would mean 230 dishes per ship could be used to tap into 23 gbps of capacity for a satellites. Each dish would not necessarily be fully utilized. A ship that really wanted connectivity for everyone on board could theoretically justify one thousand Starlink dishes.

Starlink is able to provide services for RV (recreational vehicles). RV ownership is at a record high with 11.2 million households owning an RV in 2021. There are about 400,000-500,000 RVs sold every year. About 46 million people in the US take an RV trip each year. There is substantial RV activity and usage in Australia, New Zealand, Norway, Germany, France and Japan.