Joker Malware Is Back: Delete These 15 Apps From Your Android Phones Right Now 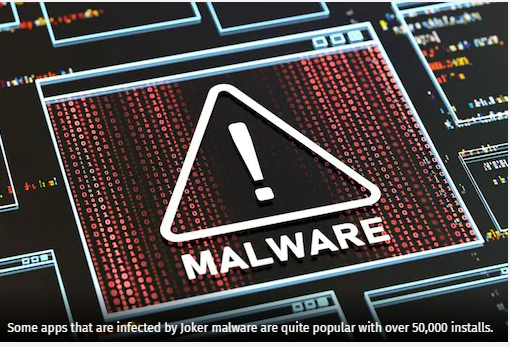 NEW DELHI: Analyst at Cybersecurity firm Kaspersky, Tatyana Shishkova, took to Twitter to alert Android phone users about the return of the potent Joker malware on Google play store. Shishkova found that the Joker malware infecting at least 14 Android apps. The Joker malware created quite a scare last year after it had infected several apps. Google had to intervene and remove those apps to protect users. But it seems like the malware is back on Google Play store again.

Some apps that are infected by Joker malware are quite popular with over 50,000 installs while there are other little-known apps as well on Shishkova’s list.

Joker malware tends to infect popular apps on Google Play store and enter the user’s phone when the apps are downloaded. Joker malware is able to make its way to Google Play store through small changes to its code and bypasses Play store’s security and vetting checks. It is quite stubborn and tends to reappear often. It was first found in 2017 and Google has been fighting hard to secure users from this malware over the years.

As for its payload, the Joker malware secretly steals money from users by subscribing them to online services in the background without the knowledge of the user. It is capable of clicking on online ads automatically and can even access OTPs from SMS to secretly approve payments. The user will not even get to know that he or she has subscribed to some service online without checking bank statements.

The Honor 60 series will be unveiled on December 1