Russia Begins Delivery of S-400 to India; All You Need to Know About the ‘Most Advanced’ Missile System 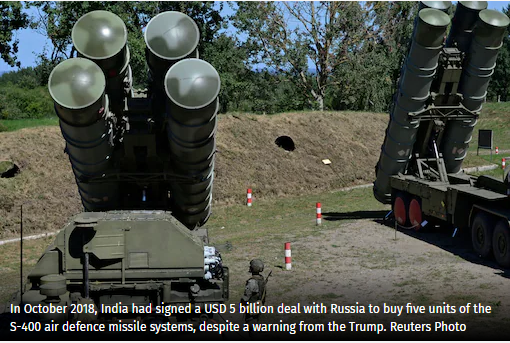 Russia has started the delivery of S-400 surface-to-air missile systems to India, according to a senior Russian official. Russia’s Director of the Federal Service for Military-Technical Cooperation (FSMTC) Dmitry Shugaev told Sputnik news that the deliveries are going as planned.

In October 2018, India had signed a USD 5 billion deal with Russia to buy five units of the S-400 air defence missile systems, despite a warning from the Trump administration that going ahead with the contract may invite US sanctions. India had made the first tranche of payment of around USD 800 million to Russia for the missile systems in 2019.

The S-400 is known as Russia’s most advanced long-range surface-to-air missile defence system. It is capable of simultaneously tracking numerous incoming objects including aircraft, missiles and UAVs in a radius of a few hundred kilometres and launch appropriate missiles to neutralise them.

It has radars that can pick up an incoming object up to a distance of 1,000 kilometres, track several dozen incoming objects simultaneously, distribute the targets to missile systems and ensure a high success rate, a report in The Hindu said.

S-400 has been specifically designed to detect and destroy a range of targets including strategic bombers, aircraft used for electronic warfare, early warning, and reconnaissance; and even fighter jets such as F-16 and F-22.

WHERE WILL IT BE DEPLOYED?

The S-400 missile defence system is equipped with four different missiles, which can engage enemy aircraft, missiles and Airborne Warning and Control System planes at 400km, 250km, the medium-range 120km and the short-range 40km.

The IAF will start focusing on the eastern borders along with providing resources for training of personnel within the country after the first squadron is deployed, a report in Hindustan Times said.

US President Donald Trump had signed a law- ‘Countering America’s Adversaries Through Sanctions Act’ (Public Law 115-44), which among other things, imposed new sanctions on Iran, Russia and North Korea.

CAATSA is a tough US law which authorises the administration to impose sanctions on countries that purchase major defence hardware from Russia in response to Russia’s annexation of Crimea in 2014 and its alleged meddling in the 2016 US presidential elections. Its provisions, include sanctions targeting Russia’s defence and intelligence sectors, serve as an important tool for the US government to discourage Russian arms purchases around the world.

So, if the US chooses, it can impose sanctions on India under CAATSA for the multi-billion dollar deal with Russia, a report in The Print said.

CAN IT INVITE US SANCTIONS?

Following US sanctions on Turkey over the procurement of S-400 missile systems, there have been apprehensions that Washington may impose similar punitive measures on India.

However, last month, two powerful US Senators have urged President Joe Biden not to impose provisions of the punitive Countering America’s Adversaries Through Sanctions Act (CAATSA) against India for buying the S-400 surface-to-air missile system from Russia.

In a letter to Biden, Senators Mark Warner of the Democratic Party and John Cornyn of the Republican Party on Tuesday urged the president to grant a national interest waiver to India as provided under CAATSA as this is in America’s national security interest.

“We strongly encourage you to grant a CAATSA waiver to India for its planned purchase of the S-400 Triumf surface-to-air missile system. In cases where granting a waiver would advance the national security interests of the US, this waiver authority, as written into the law by Congress, allows the President additional discretion in applying sanctions,” the two Senators wrote.

Visualizing The Most Widespread Blood Types in Every Country

Is Your IP Address A Google Ranking Factor?