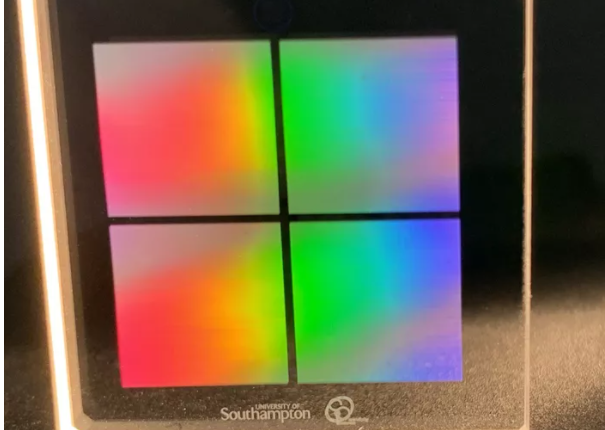 Researchers with the University of Southampton, UK, published research eerily reminiscent of the sci-fi concept of a “data cube” — promising incommensurate storage in a palm-sized device. However, that concept may be much closer to reality than expected, as the research describes a new, high-speed laser method of writing onto 5D structures. The 5D structure, built out of silica glass, can support long-term writings – and achieve storage densities that are 10,000x higher than current Blu-Ray technology.

The new laser technology enabled the researchers to write in five dimensions – two optical and three spatial. The new approach can achieve write speeds of 1,000,000 voxels per second, the equivalent of 230 kilobytes of data (more than 100 pages of text) per second. That may sound ridiculously slow by today’s standards – just look at the speeds the best SSDs achieve in comparison, such as 5,000 MB per second writes on the Samsung 980 Pro. However, some particular use-cases could benefit very much from such a technology, such as museums, libraries, and sure, the Ark-paradigm in science fiction. Furthermore, this technology actually could translate into real-world, cold-storage applications.

“Individuals and organizations are generating ever-larger datasets, creating the desperate need for more efficient forms of data storage with a high capacity, low energy consumption and long lifetime,” said doctoral researcher Yuhao Lei from the University of Southampton in the UK. “While cloud-based systems are designed more for temporary data, we believe that 5D data storage in glass could be useful for longer-term data storage for national archives, museums, libraries or private organizations.”

The team decided to test-drive their technology by writing 5 GB of data onto a 5D, silica glass disk. The researchers then asked one of the essential questions regarding storage techniques – is the data you are writing stable enough that you can get it back from its written state? The answer was a 100% successful readout. However, the test was conducted in only a small portion of the available medium – if filled to the brim, the silica glass disc would be able to hold 500 TB of data. The researchers say that with improvements to the writing techniques, particularly by taking advantage of parallelism, they can design a system that can fill that same 500 TB in a mere 60 days. The picture is a nice one: imagine if 500 TB of backup-only storage could be condensed onto a single external hard drive. That’s the density scale advantage of this medium, compared to the file servers one would need today.

How the data is recorded onto the medium is eerily reminiscent of Blade Runner 2049’s data spheres built from what appeared to be glass. Unfortunately, they also exhibited cracks that turned the medium unreadable. That would also seem to be the case on these particular silica glass data storage devices. The way of inscribing information is through extremely localized and precision-guided interactions between a high-repetition femtosecond laser and the silica glass structure. Essentially, the technique involves conducting extremely controlled explosions inside the silica structure. These explosions are controlled for temperature due to the nature of the laser’s interaction with the silica glass and the resulting data structures (a nanolamella-like structure measuring just 500 by 50 nanometers each) can then be read back.

The 3D part of the object is easy enough to understand – it’s a cube. However, the data density of this technique isn’t achieved merely via a spatial arrangement of information. The fourth dimension of storage is achieved by considering the light’s slow axis orientation through the nanolamella-like structure, for which the researchers explore behaviors of a particle called soliton. This allows another set of binary (1,0) coordinates to be referenced and read from a single point in the data cube’s space. If there’s a soliton, it’s set to 1. If there isn’t a soliton, it’s set to 0.

“This new approach improves the data writing speed to a practical level, so we can write tens of gigabytes of data in a reasonable time,” said Lei. “The highly localized, precision nanostructures enable a higher data capacity because more voxels can be written in a unit volume. In addition, using pulsed light reduces the energy needed for writing.”

Research has already demonstrated that 5D data storage in silica glass could last basically forever. So long as we don’t let these glass storage devices fall – or crack, of course. And with these new nanolamella-like structures being measured at a nanometer scale, I suppose there’s an image for the future where it’s still used as a technological advancement buzzword – if not for transistors anymore, then for nanolamellas and the data cube storage of (yesterday’s) sci-fi. The nm will live on.