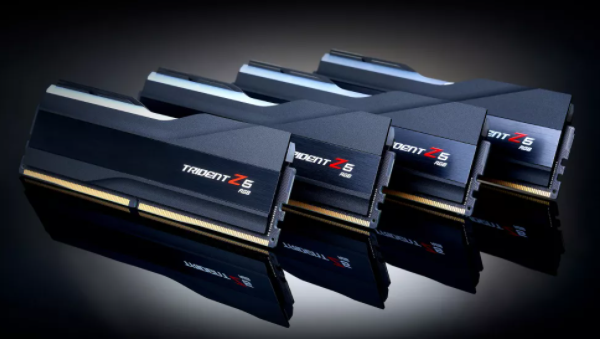 G.Skill was among the first to announce its intentions to embrace DDR5 memory for next-generation CPU platforms, and those efforts expand today with the launch of a new flagship member of its Trident Z5 family. Now, G.Skill claims to have the world’s fastest DDR5-6600 memory on the market for the upcoming 12th-Gen Alder Lake processors from Intel.

The company also promises lower timings than typical DDR5 memory at CL36-36-36 versus the JEDEC-spec CL40-40-40. Of course, higher latency compared to DDR4 is something that we’ll be watching closely with the first Alder Lake system reviews, so it’s good to see that G.Skill is already taking a proactive approach with its Trident Z5 family.

The heat spreader has a brushed black aluminum accent, while the body is either metallic silver (for a two-tone look) or matte black. If you opt for the Trident Z5 RGB version of the modules, you’ll obviously find an RGB lightbar to enhance the inside of your gaming rig.

At this point, G.Skill has only announced that the DDR5-6600 versions of its Trident Z5 and Trident Z5 RGB will be available in 32GB kits (2x16GB), all of which use Samsung ICs. The company even posted a screenshot showing validation of the memory kits at full speed to back up its claims.

The new G.Skill Trident Z5 modules are coming into a growing market for DDR5 memory. Just last week, the company announced modules rated for up to DDR5-6400 speeds. And earlier this week, TeamGroup announced its T-Force Vulcan modules available in up to DDR5-5200 speeds (in up to 2x32GB capacities).

Intel is rumored to launch its Alder Lake processors capped off by the flagship 16-core/24-thread Core i9-12900K later this month, with a launch to occur in early November. In addition, flagship Z690 motherboards for Alder Lake will feature DDR5 and PCIe 5.0 support, both firsts for the consumer PC market. However, some motherboard manufacturers will give customers the option to use the best DDR4 memory around to hit lower price points. This should allow consumers to get a taste of Alder Lake without paying the price premium for next-generation DDR5 memory.

Nimbus One is an electric two-seater tricycle with a maximum speed of 50 mph, and a…