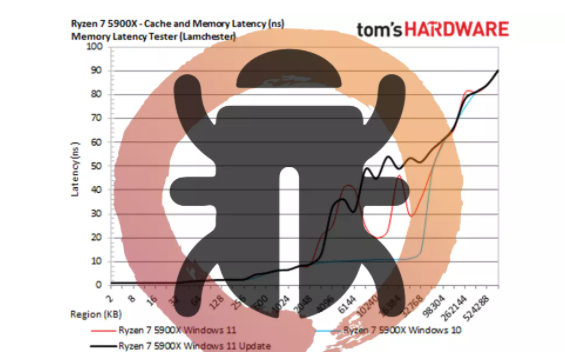 We put a few of the leading AMD Ryzen chips from our Best CPUs for gaming list through several gaming benchmarks and targeted tests to see the extent of the newly-announced Windows 11 bug that reduces performance on AMD’s processors.

As you’ll see in our extensive CPU Benchmarks below, we found that AMD’s L3 latency can be as much as six times higher in Windows 11 compared to Windows 10, and that L3 bandwidth can be up to 12X higher in Windows 10. We didn’t see such severe impacts in our gaming tests, with our biggest Windows 10 vs 11 differences weighing in at 7% in one game title, while others are far more muted. Notably, we tested with the first Windows 11 update that actually made the bug worse.

AMD’s announcement last week that it and Microsoft were jointly investigating two performance-sapping bugs in Windows 11 was an eye-opener, especially since AMD says they impact all Windows 11-compatible AMD processors and can reduce gaming performance by up to 15% in some eSports titles and 3-5% in desktop PC applications. The bug impacts chips with more than eight cores the most, so we also put the 12-core Ryzen 9 5900X that dominates our CPU Benchmark hierarchy to the test.

Frankly, the bugs couldn’t come at a worse time: Intel is on the cusp of launching its seemingly-potent Alder Lake chips that could swing the advantage back in its favor. Making things worse for AMD, Windows 11 has new scheduler optimizations specifically for Alder Lake, so reviewers will use the new operating system for testing. That raises concerns that the bug could possibly result in unfair comparisons.

It’s surprising that two severe bugs squeezed past both AMD and Microsoft’s QA teams — the first reports of the L3 bug popped up in forums several months ago as enthusiasts tested the pre-release Windows 11 builds.

Additionally, AMD reports that its UEFI CPPC2 (Collaborative Power and Performance Control 2) feature, a technology that helps to steer lightly-threaded work to the fastest cores on the chip, also has issues that can impact lightly-threaded applications (like games). AMD says this bug is more detectable in chips with more than eight cores and >65W TDP.

AMD and Microsoft are jointly investigating, and a software update to fix the CPPC2 issue and a Windows Update to remediate L3 latency problems are in the works. AMD says both should arrive in October 2021 (this month). (Notably, these issues are separate from the performance issues surrounding Microsoft’s recommended VBS and HVCI security settings that have caused an outcry. We put those issues to the test last week.)

Basic versions of the fixes are already in current preview builds of Windows, but they aren’t final yet. We’re putting the Windows 11 issues to the test, and we’ll follow up with post-fix tests when the patches come to the general public.

We can see dramatic changes in our cache latency and bandwidth measurements below, but we didn’t see as profound of an impact in the selection of games we tested. However, it is noteworthy that AMD’s advisory states that the bug impacts both the “measured and functional L3 cache latency,” meaning that the results we measure with microbenchmarks are also indicative of the performance received by some applications. Naturally, the higher latency will impact some AMD processors and games/applications more than others.

AMD is coy with the details of just which applications and games are impacted, and the company even adjusted its advisory to remove its original mention of eSports titles. That makes it a bit tough to narrow down our tests to the impacted games, but we still have plenty of game testing to examine, not to mention cache and Infinity Fabric testing. In either case, we’ll examine where things stand right now, and we’ll reevaluate after AMD and Microsoft issue the patches.

We tested with Windows 11 Pro 23000.258 and the Windows 11-compatible Nvidia 472.12 graphics driver (the latest driver arrived after testing was complete). As always for CPU testing, we used an Nvidia GeForce RTX 3090 to minimize the graphics bottleneck. We also stuck with a 1920×1080 resolution, so be aware that the impact of the bug will vary with different resolutions and graphics cards.

We used a Core i7-11700K as a comparison point to give us a general idea of the expected variances from the operating system change. However, be aware that game code and drivers respond differently to the respective CPU architectures, making the 11700K a crooked measuring stick, at best.

We don’t have a great baseline for game testing. All of AMD’s Windows 11-compatible processors are impacted and we can’t toggle the bugs on or off, making it hard to tell how much of the performance deltas we should simply chalk up to the differences between operating system revisions, or to the bugs. Be aware that 1% variances generally fall into the expected standard deviation, so they don’t represent a meaningful change.

AMD points out that the CPPC2 bug (boosting) impacts chips with more than eight cores the most, but that does mean that smaller chips are impacted, too. Additionally, as you’ll see in the cache testing below, the L3 issues impact every AMD chip we’ve tested.

AMD specifically called out eSports titles in the original version of its advisory, but Project Cars 3 suffered the biggest performance regression in the move from Windows 10 to 11. Here we can see that the Ryzen 9 5900X is 7.5% slower in Windows 11, while the Ryzen 7 5800X is 5.3% slower. Meanwhile, the 11700K only drops 1.9%.

The 5900X also dropped 3.9% in the Far Cry 5 benchmark, but the 5800X offered roughly the same level of performance with both Windows 10 and 11. We also threw in DOTA 2 to see the impact in an eSports title, and Strange Brigade to measure performance in a game that pushes out ridiculous frame rates. The 5900X was 2.9% and 2% slower, respectively, but you probably won’t notice that with the graphics card blasting out more than 200 fps.

Above you can see the tally of the performance deltas. The 5900X does lose the most performance among the tested games, but most of the variances are very small. AMD’s original advisory pointed out that some eSports games can suffer 10 to 15%, but we didn’t see that in any of our tests. That doesn’t mean such deltas don’t exist, as different games and applications are impacted differently, so your mileage will vary.

Now let’s move on for a closer look at the L3 cache bug.

Microsoft recently issued its first Windows 11 patch, and as you’ll see clearly in the slides below, it actually made latency worse. We recorded the latency measurements above with the AIDA utility and the latest version of Windows 11. We saw a roughly 3X increase for all of the AMD chips, while the Intel chip returned identical L3 readings in both Windows 10 and 11.

The basic idea behind any on-chip cache is to keep frequently accessed data as close to the execution cores as possible, thus improving performance. The L3 cache is slower than other caches (like L1 and L2), but its higher capacity means it can store more data, thus improving the hit rate (the number of times useful data is held in the cache). There’s a reason AMD calls it “Game Cache” — L3 cache is very important to performance, and games in particular can suffer from either high L3 latency or reduced cache capacity.

The first four slides above outline our cache and memory latency benchmarks with the AMD Ryzen 5900X, 5800X, 3800X and the Intel Core i7-11700K using the Memory Latency tool from the Chips and Cheese team. These tests measure cache latency with varying sizes of data chunks, and we can clearly see the much higher L3 latency near the center of the chart. In fact, the recent Windows 11 update made the issue even more severe, as we can see with the black lines in the first two slides.

These more in-depth tests measured a ~5X increase in L3 latency for the Ryzen 5000 chips and a 6X increase for the Ryzen 7 3800X. Meanwhile, the Core i7-11700K enjoys a slightly better cache and memory latency profile with Windows 11.

Be aware that different benchmark utilities test with unique measurement methodologies, algorithms, and cache strides, so results can and do vary. As such, we turned to SiSoftware’s Sandra is used to measure cache and memory latency with three different access patterns, giving us more granularity than a single test and helping to sanity check the results we recorded with the other tools. The last three slides show the results with the 5900X with three different data patterns and generally align with what we’ve seen in other tests.

Our first tests of L3 cache bandwidth were quite surprising. AIDA measured 7.5X more L3 read bandwidth, 15X more write bandwidth, and 12X more copy bandwidth for the Ryzen 7 5900X in Windows 10, and similar results with the Ryzen 7 5800X and 3800X. Notably, copy bandwidth is the only measurement of the three that’s indicative of application performance.

Again, different utilities use different methodologies, so we also tested with SiSoft Sandra to get a different take on bandwidth. The fourth and fifth slides show that the 5900X delivers roughly the same bandwidth as Windows 11, highlighting the difference in methodologies. Likewise, different games and applications will suffer to varying degrees based upon their access patterns.

Finally, we used SiSoft Sandra’s core-to-core latency and bandwidth test (best pair match) to measure Infinity Fabric throughput with varying data types. For the 5800X, this test measured drastically reduced throughput with some data types, and it’s reproducible. Oddly enough, counter to our expectations given that it has more than eight cores, the Ryzen 9 5900X didn’t suffer from the same inconsistent performance trend.

The results of these synthetic tests paint a dire picture, but we have to view them in the correct light — the issues had a limited impact on the games that we’ve tested thus far. AMD says that the fix for both the L3 and CPPC2 bugs will come this month, and we’ll follow up with another round of testing to gauge the impact. Stay tuned.

How This Photographer Creates His Light Painted Halo Long Exposures