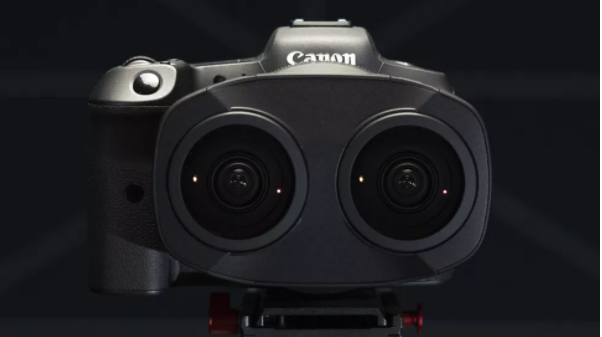 Canon isn’t known for its left-field surprises, but it’s just announced a big one in the form of a dual fisheye lens that lets Canon EOS R5 owners shoot 180-degree VR video.

The Canon RF 5.2mm f/2.8L Dual Fisheye is its first VR lens and the world’s first for digital interchangeable lens cameras that can shoot 180-degree VR video. We’ve seen lots of cameras capable of shooting immersive 3D video before, but not pro lenses that are designed for cameras like the Canon EOS R5.

The reason this lens has been designed for the EOS R5 in particular is because of that camera’s 8K-capable sensor. This means you can shoot high-resolution VR in formats like Canon Log 3, for high dynamic range, and also shoot in low-light thanks to that bright f/2.8 aperture.

This all hints at the real reason for the unexpected arrival of a VR-capable RF lens – helping to streamline the VR capture workflow. Right now, shooting high-quality VR requires two cameras with two lenses, and the ability to synchronize these different viewpoints and files together. With this lens and its new software, Canon says it’s aiming to simplify this process to finally get more people creating (and watching) 180-degree VR videos.

To do this, the lens creates two circular, 4K images from the EOS R5’s 8K sensor. These are then flattened by Canon’s VR software to give you an 8K file – or what will look like an 8K video when you view it on a headset. The manual focus RF 5.2mm f/2.8L Dual Fisheye is a pro-level lens, too, with a special coating to prevent ghosting and flares, plus full weather-proofing. There’s also an ND filter holder on the rear of the lens to allow you to keep shooting in bright conditions.

But who exactly is Canon making this lens for? Canon says that initially it’s aimed more at the business side, in areas like training and healthcare, but that it’s particularly looking forward to what creators do with it. Those creators will need to have a reasonable budget, because the RF 5.2mm f/2.8L Dual Fisheye lens will cost £2,099 / AU$3,849 (around $2,859) when it goes on sale in December. But that’s also pretty affordable for a high-quality VR shooting setup like this lens and the Canon EOS R5.

Analysis: Fun intentions, but the VR jury is still out

Canon’s decision to make a 180-degree VR lens for its mirrorless cameras is equal parts fascinating and puzzling. There’s no doubt it has the potential to streamline the VR video capture workflow – but there are still big question marks over how big the demand is for this kind of immersive video.

Over four years ago, Google made an unsuccessful attempt to bring 180-degree VR video to the mainstream with its VR180 format and now-shuttered Daydream platform. Some point-and-shoot VR180 cameras followed from the likes of LG and Lenovo, but these quickly fizzled out, leaving the format lacking in hardware support.

It is still possible to watch immersive videos in the YouTube apps of headsets like the Oculus Quest 2 – and 180-degree video does make a lot more sense, from a storytelling perspective, than 360-degree movies. The latter is ideal for gaming, but doesn’t allow a director to control the narrative and brings big challenges like the need to hide on-set lighting and equipment.

The combination of the RF 5.2mm f/2.8L Dual Fisheye lens and a Canon EOS R5, which has a full-frame sensor capable of shooting 8K video, is also likely to be a potent one that’s capable of shooting in the resolution needed to make genuinely watchable videos.

But the question remains – has 180-degree VR video failed to take off due to a lack of high-quality content, or because people don’t want to be sealed off from the real world while watching videos? Clearly, Canon wouldn’t have made the RF 5.2mm f/2.8L Dual Fisheye lens and its Canon VR software app on a whim, so we’re looking forward to seeing exactly what creators do with it.

While the RF 5.2mm f/2.8L Dual Fisheye lens may start off shooting in the more humdrum worlds of training videos, maybe it will one day day shoot the movie equivalent of Half-Life: Alyx and give 180-degree VR video the shot in the arm it still needs.