Lab-made mini brains grow their own sets of ‘eyes’ 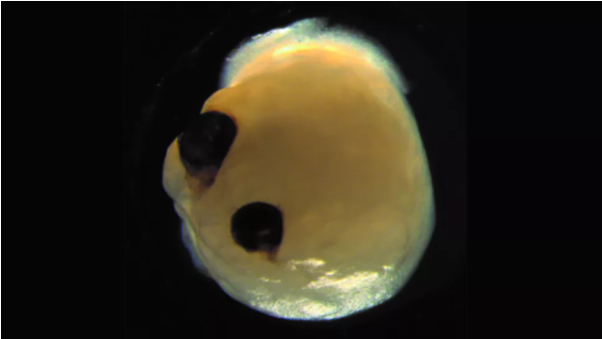 Scientists recently grew mini brains with their own sets of “eyes,” according to a new study.

Organoids are miniature versions of organs that scientists can grow in the lab from stem cells, or cells that can mature into any type of cell in the body. Previously, scientists have developed tiny beating hearts and tear ducts that could cry like humans do. Scientists have even grown mini brains that produce brain waves like those of preterm babies.

Now, a group of scientists has grown mini brains that have something their real counterparts do not: a set of eye-like structures called “optic cups” that give rise to the retina — the tissue that sits in the back of the eye and contains light-sensing cells, according to a statement.

In the human body, the retina sends signals to the brain via the optic nerve, allowing us to see images. “In the mammalian brain, nerve fibers of retinal ganglion cells reach out to connect with their brain targets, an aspect that has never before been shown in an in vitro system,” senior author Jay Gopalakrishnan, a researcher at University Hospital Düsseldorf, said in the statement. (Ganglion cells are neurons located in the inner surface of the retina that communicate directly with the brain.)

Previously, researchers had grown optic cups individually in labs, but this is the first study that integrated optic cups into brain organoids, according to the statement.

Gopalakrishnan and his team adapted a technique they previously developed for turning stem cells into neural tissue in order to create the mini brains with optic cups. Once the stem cells had developed into mini brains, the organoids formed optic cups. The optic cups appeared as early as 30 days and matured within 50 days, a timeframe similar to how the retina develops in a human embryo, according to the statement.

In total, the researchers created 314 mini brains, and 72% of them formed optic cups. The organoids contained different types of retinal cells that formed active neuron networks that responded to light, according to the statement. The organoids also formed lens and corneal tissue.

“Our work highlights the remarkable ability of brain organoids to generate primitive sensory structures that are light sensitive and harbor cell types similar to those found in the body,” Gopalakrishnan said in the statement.

Why are scientists growing mini brains like these in the lab? These organoids can be useful for studying human brain development and related diseases. Scientists could use the new organoids — with their optic cups — to study brain-eye interactions during embryo development, Gopalakrishnan said. What’s more, they can be used to study retinal disorders and maybe even be used to create personalized retinal cell types for therapies.

The researchers now hope to figure out how to keep the optic cups viable for a long time and use them to research the mechanisms behind retinal disorders.

The findings were published Aug. 17 in the journal Cell Stem Cell.