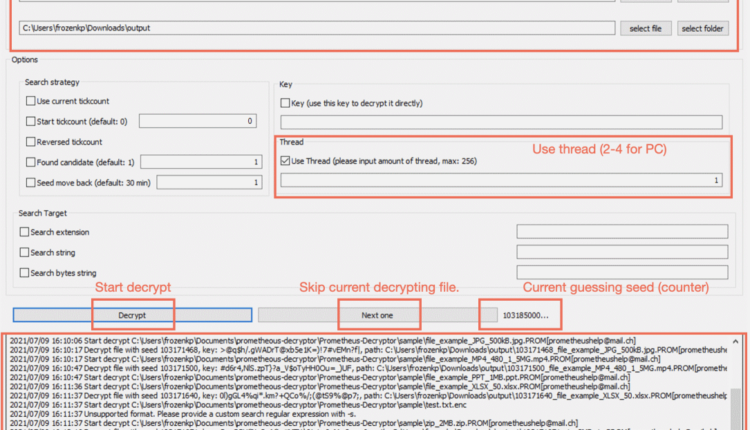 Taiwanese security firm CyCraft has released a free application that can help victims of the Prometheus ransomware recover and decrypt some of their files.

Available on GitHub, the decryptor effectively works by brute-forcing the encryption key used to lock the victim’s data.

“[The] Prometheus ransomware use Salsa20 with a tickcount-based random password to encrypt [files]. The size of the random password is 32 bytes, and every character is a visible character. Since the password use [the] tickcount as the key, we can guess it brutally,” the company’s experts wrote in a blog post at the start of the month.

The only downside of CyCraft’s decryptor is that it can only handle brute-forcing the decryption key from small files only, Emsisoft, a company known for breaking several ransomware strains, has told The Record.

However, the decryptor’s release appears to have had an impact on the activity of the Prometheus gang.

First spotted in February this year, the gang had previously listed more than 40 victims on its leak site. It drew some attention to itself by claiming an association with the more infamous REvil gang, which they removed after the REvil gang’s attack on Kaseya.

In fact, codewise, the two ransomware strains couldn’t have been more different. REvil was an advanced piece of C++ malware, while Prometheus was based on the leaked code of the Thanos ransomware, coded in C#.

An Emsisoft spokesperson did not rule out that the company would eventually create a decryptor for Prometheus and the other Thanos strains that could also recover large files. If they do, the app would be made available on the company’s website and the NoMoreRansom portal.

With Thanos-based ransomware strains making new victims on a weekly basis, this might be sooner than later.