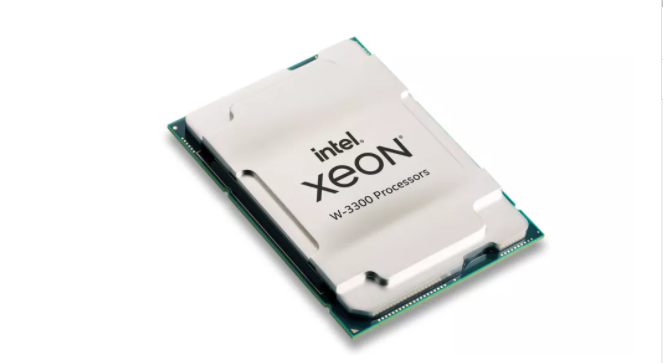 Today Intel launched the Xeon W-3300 family of workstation processors to round off the chipmaker’s Ice Lake product lineup. Xeon W-3300 will offer up to 38 Sunny Cove cores at 270W with support for up to 4TB of memory.

The Xeon W-3300 series arrives to replace the existing Xeon W-3200 (Cascade Lake) lineup. In comparison to Cascade Lake, Ice Lake delivers a substantial IPC uplift up to 19%. In addition to exploiting a new microarchitecture, Xeon W-3300 chips also offer a higher number of cores and more and faster PCIe lanes. The Ice Lake-based processors are on Intel’s first-generation 10nm process node so clock speeds aren’t as impressive as we would hope. The single-core boost clock speed peaks at 4 GHz. Furthermore, the push for more cores also bump the TDP up to 270W as opposed to Cascade Lake’s 255W.

Like its 3rd Generation Xeon Scalable counterparts, the Xeon W-3300 family resides on motherboards with the LGA4189 socket and C21A chipset. Regardless of the SKU, the 10nm workstation chips provide 64 PCIe 4.0 lanes and support up to 4TB of memory DDR4-3200 ECC memory through an eight-channel memory configuration. The C21A chipset brings Wi-Fi 6E and Thunderbolt 4 connectivity.

Unlike the Xeon Scalable lineup that goes up to 40 cores, the Xeon W-3300 is limited to 38 cores. The cache configuration remains the same, though. We’re looking at 1.5MB of L3 cache per Sunny Cove core with the exception of the entry-level W-3323 chip, which boasts 1.75MB of L3 cacher per core.

The Xeon W-3375 will lead the charge with 38 cores, 76 threads and 57MB of L3 cache. The 38-core processor has a modest 2.5 GHz base clock and a 3.3 GHz all-core boost clock with a 270W TDP. The flagship SKU’s specifications certainly seem underwhelming in comparison to AMD’s Threadripper Pro army that maxes out at 64 cores.

According to Intel, the Xeon W-3365 is faster than AMD’s Threadripper Pro 3975WX, which also features 32 cores and 64 threads albeit higher clock speeds, more L3 cache and 10W higher TDP. Intel claims that the Xeon W-3365 delivers up to 27%, 47% and 10% better performance in SPECworkstation 3 v3.1’s product development, energy and general operation benchmarks, respectively, than the Threadripper Pro 3975WX.