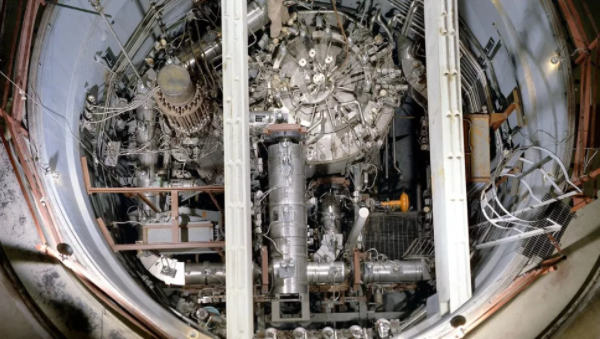 Chinese government scientists have unveiled plans for a first-of-its-kind, experimental nuclear reactor that does not need water for cooling.

The molten-salt nuclear reactor, which runs on liquid thorium rather than uranium, is expected to be safer than traditional reactors because the molten salt cools and solidifies quickly when exposed to the air, insulating the thorium, so that any potential leak would spill much less radiation into the surrounding environment compared with leaks from traditional reactors.

Nuclear reactor, The prototype reactor is expected to be completed next month, with the first tests beginning as early as September. This will pave the way for the building of the first commercial reactor, slated for construction by 2030.

As this type of reactor doesn’t require water, it will be able to operate in desert regions. The location of the first commercial reactor will be in the desert city of Wuwei, and the Chinese government has plans to build more across the sparsely populated deserts and plains of western China, as well as up to 30 in countries involved in China’s “Belt and Road” initiative — a global investment program that will see China invest in the infrastructure of 70 countries.

Nuclear reactor, Chinese government officials view nuclear energy exports to be a key part of the Belt and Road program.

“‘Going out’ with nuclear power has already become a state strategy, and nuclear exports will help optimize our export trade and free up domestic high-end manufacturing capacity,” Wang Shoujun, a standing committee member of the China People’s Political Consultative Conference (CPPCC) — a political advisory body which acts as a link between the Chinese government and business interests, said in a report on the CPPCC’s website.

Thorium — a silvery, radioactive metal named after the Norse god of thunder — is much cheaper and more abundant than uranium, and cannot easily be used to create nuclear weapons. The new reactor is a part of Chinese President Xi Jinping’s drive to make China carbon-neutral by 2060, according to the team at the Shanghai Institute of Applied Physics that developed the prototype. China currently contributes 27% towards total global carbon emissions, the largest amount from any individual country and more than the entire developed world combined, according to a 2019 report by the US-based Rhodium Group.

Nuclear reactor,, “Small-scale reactors have significant advantages in terms of efficiency, flexibility and economy,” Yan Rui, a physics professor at the Shanghai Institute of Applied Physics, and colleagues wrote in a paper about the project published July 15 in the journal Nuclear Techniques. “They can play a key role in the future transition to clean energy. It is expected that small-scale reactors will be widely deployed in the next few years.”

Instead of using fuel rods, molten-salt reactors work by dissolving thorium into liquid fluoride salt before sending it into the reactor chamber at temperatures above 1,112 Fahrenheit (600 degrees Celsius). When bombarded with high energy neutrons, thorium atoms transform into uranium-233, an isotope of uranium which can then split, releasing energy and even more neutrons through a process called nuclear fission. This starts a chain reaction, releasing heat into the thorium-salt mixture, which is then sent through a second chamber where the excess energy is extracted and transformed into electricity.

Thorium reactors have long held an elusive appeal for nuclear scientists. Sitting just two positions to the left of uranium on the periodic table of chemical elements, nearly all mined thorium is thorium-232, the isotope used in nuclear reactions. In contrast, only 0.72% of total mined uranium is the fissile uranium-235 used in traditional nuclear reactors. This makes thorium a much more abundant source of energy.

Thorium’s advantages don’t stop there. The waste products of uranium-235 nuclear reactions remain highly radioactive for up to 10,000 years and include plutonium-239, the key ingredient in nuclear weapons. Traditional nuclear waste has to be housed in lead containers, isolated in secure facilities, and subject to rigorous checks to ensure that it doesn’t fall into the wrong hands. In contrast, the main byproducts of a thorium nuclear reaction are uranium-233, which can be recycled in other reactions, and a number of other byproducts with an average “half-life” (the time it takes for half of a substance’s radioactive atoms to decay to a non-radioactive state) of just 500 years.

After the 2 megawatt prototype has undergone tests in September, China plans to build its first commercial thorium reactor. Measuring only 10 feet (3 meters) tall and 8 feet (2.5 m) wide, the researchers claim it will be capable of generating 100 megawatts of electricity, enough to provide power for 100,000 people. Still, it must be paired with other equipment, like steam turbines, to make usable electricity.

The molten-salt reactor concept was first devised back in 1946 as part of a plan by the predecessor to the U.S. Air Force to create a nuclear-powered supersonic jet.

However, the experiment and the many others which followed — including an experimental reactor at Oak Ridge National Laboratory in Tennessee which operated for many years — ran into problems. Corrosion caused by the hot salt cracked pipes and the weak radioactivity of thorium makes it very difficult for fission reactions to build up to sustainable levels without adding uranium. The investigations into thorium stopped.

It is not yet clear how, sixty years later, Chinese researchers have solved these technical problems.

China’s effort is the furthest developed of many other fresh attempts to create thorium reactors, including one called Natrium, which plans to build a pilot plant in Wyoming and enjoys the financial backing of Bill Gates and Warren Buffett.

Nuclear reactors aren’t the only technology China is investing in as a part of its effort to become carbon-neutral. The Baihetan Dam, the second-largest hydroelectric facility in the world after China’s Three Gorges Dam, went online in June and has an energy-generating capacity of 16 gigawatts. The U.K.-based energy consultancy Wood Mackenzie estimates that China will add 430 gigawatts of new solar and wind power capacity in the next five years.

Even as China positions itself as a global leader in the fight against climate change, the country is already under acute strain from extreme weather events. Severe flooding in the province of Henan this week displaced around 100,000 people and killed at least 33, CNN reported. The weather bureau in Zhengzhou, the capital of the region, said the three days of rain matched levels seen only “once in 1,000 years.”

Why does Windows 11 require TPM Chip?