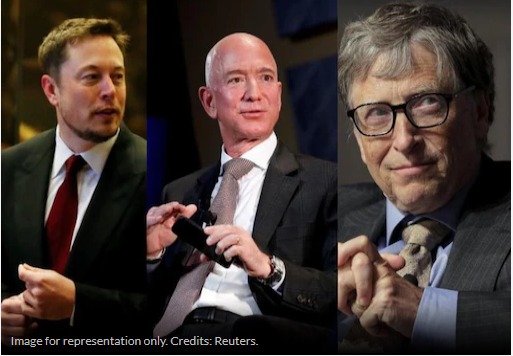 These eminent personalities have at one point in their lives started from scratch because not everyone is born with a silver spoon. Let’s take a look at the first jobs of these business tycoons. Billionaires like Elon Musk, Jeff Bezos, and Warren Buffet are an inspiration to many. Their names top the world ranking charts of billionaires and have a vital contribution to their country’s economic stability. Running business empires in a distinctive way has made these tycoons stand out from the crowd. But there must have been a starting point because not everyone is born with a silver spoon. These billionaires came from diverse fields and were completely different personalities, but all these big guns had two things in common. The first was that they identified their passion at a young age and the second is that their determination to establish a benchmark in their respective fields.

People like Elon Musk, Jeff Bezos, Warren Buffet, Mark Zuckerberg, Steve Jobs, Bill Gates, and Ratan Tata are some of these billionaires who have worked really hard to make their way to the top. These eminent personalities have at one point in their lives started from scratch. Let’s take a look at the first jobs of these business tycoons –

Elon Musk: Musk is quite popular among people for his Tesla designs and tweets. The chief executive of Tesla and SpaceX got his first job as a Software Engineer in 1983. He used to sell computer games and take home $500, that is, Rs. 37,405 per month. He grew up in South Africa and later immigrated to Canada at the age of 17 and started working as a software engineer.

Jeff Bezos : The owner of Amazon and currently the world’s second-richest person, Bezos landed his first job as a fry at McDonald’s. He was just 16 years old and earned $2.69, that is Rs 201 per hour.

Warren Buffet: The American business tycoon, Warren Buffett worked as a newspaper delivery guy in 1994. The chairman and CEO of Berkshire Hathaway delivered newspapers for The Washington Post and earned $175 every month, that is, Rs. 13,091.

Mark Zuckerberg: Zuckerberg made communication, with people who live far away, easy by introducing Facebook. Not many know that Facebook CEO’s first job was to build a music player called Synapse. He was 18 when he worked for Synapse and later went on to make one of the most influential platforms of social media.

Steve Jobs: How many have played those Atari video games which were quite a big deal back in time? Well, the founder of Apple, Steve Jobs started his career by making video games for Atari and today his company is one of the most valuable brands in the market.

Bill Gates: Once who worked as a computer programmer for TRW, today is the co-founder of Microsoft Corporation. At TRW was his first job which he started during his senior year in high school at the mere age of 15.

Ratan Tata: Popular industrialist and man with a golden heart, Ratan Tata got his first job at Tata Steel in 1961. He used to manage the blast furnace and shovel limestone.

8 Enterprise SEO Skills That Add Value for Your Team & Career