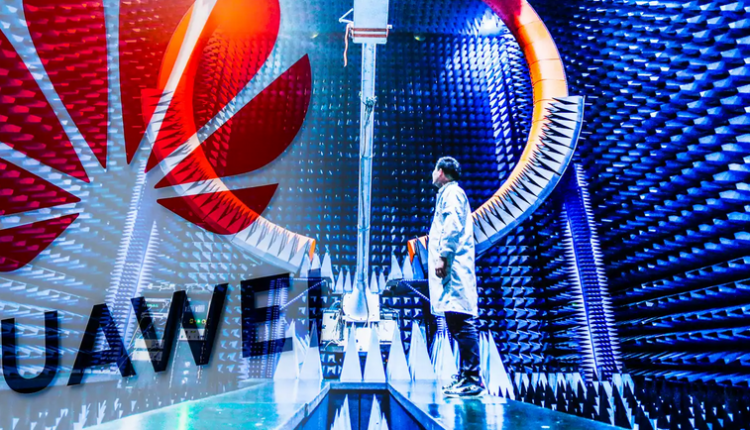 TAIPEI — For anyone who thought Huawei Technologies had buckled under the strain of a yearslong U.S. crackdown, it might come as a surprise that the Chinese tech group is looking to hire chip engineers in Munich, software developers in Istanbul and AI researchers in Canada, along with hundreds of Ph.D. candidates at home and abroad.

Far from beaten, the hiring push reveals a company that is determined to find a new path to growth after Washington’s sanctions and political pressure left its once-thriving smartphone and telecom equipment businesses battered and bruised.

Nikkei Asia looked at job postings on the company’s various recruitment sites and its official LinkedIn account, finding hundreds of positions across Europe and Canada related to artificial intelligence algorithms, autonomous vehicle engineering, software and computing infrastructure, chip development and quantum computing — all areas that the U.S. is also investing heavily in.

Huawei currently has no tech development-related job openings in the U.S.

“These new, rising areas cannot rely solely on talents locally but also need international talent to stimulate Huawei’s tech advancement and make it competitive,” Chiu Shih-fang, a tech supply chain analyst at the Taiwan Institute of Economic Research, told Nikkei Asia. “Huawei used to donate or fund international universities’ research programs to attract young talents, but this measure is now facing headwinds due to potential geopolitical interference. Huawei has to look for other ways, such as massive direct hiring in multiple countries, to keep its diverse talent pool growing.”

The founder of Huawei himself, Ren Zhengfei, has acknowledged this need, vowing to hire at least 8,000 fresh graduates in 2021 and greatly increase research spending.

“2021 and 2022 will be the most critical and challenging two years for Huawei to seek survival and strategic development. Talent is the most important key,” Ren said, according to the transcript of an internal speech seen by Nikkei Asia. 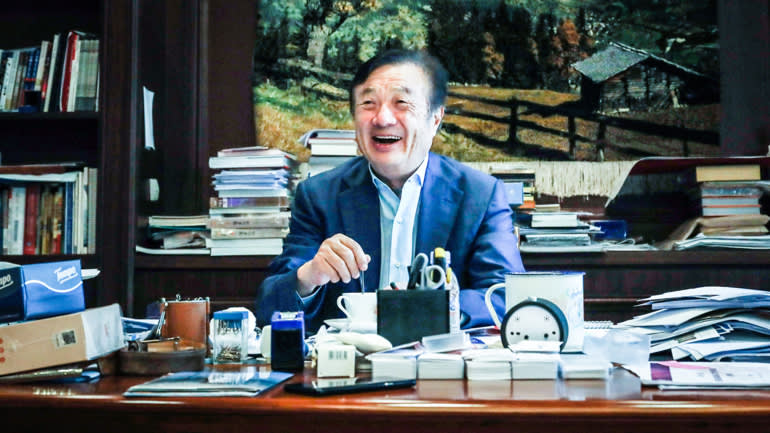 Ren went on to say the company plans to pour “several billions of dollars” into leading technologies this year on top of the usual R&D budget.

The hiring blitz and openhanded spending represent a concerted effort to sustain — and if possible increase — Huawei’s technological prowess in the face of a U.S. crackdown begun under former President Donald Trump.

In May 2019, his administration labeled Huawei a threat to national security and put the company on the so-called Entity List, restricting its use of American technology. Huawei turned to non-U.S. suppliers to keep its business afloat, but Washington responded by closing loopholes in its trade restrictions — in 2020, the government banned all foreign suppliers from providing products containing any American technology to Huawei unless they obtained prior approval.

The U.S. blacklisting revealed in dramatic fashion the weak points in Huawei’s supply chain, especially for the cutting-edge chips that power its devices. The company has tried to plug those gaps by ramping up investment in domestic chip-related companies, as Nikkei Asia earlier reported.

But the clampdown has shown no sign of easing under President Joe Biden, who took office in January. Commerce Department Secretary Gina Raimondo said she sees no reason to remove blacklisted companies from the Entity List, while Huawei itself says it anticipates the U.S. ban will be a “long-term campaign.”

In response, the company has expanded its survival strategy from shoring up existing business segments, like smartphones, to foraying into new ones.

This trend can be seen in the current hiring blitz. In Munich, Huawei is recruiting several development teams for wireless chipsets and automotive chips — the German city is also home to luxury carmaker BMW. The Chinese company is betting big on cutting-edge automotive technologies. In addition to hiring many engineers in automotive and self-driving technology, it recently teamed up with Chinese carmaker Seres to build “intelligent” electric vehicles.

Huawei also has an optical and quantum computing lab in Munich. Quantum computing — which applies the principles of quantum mechanics to create computers more powerful than conventional supercomputers — is a key battleground for the world’s leading tech companies, including IBM, Intel and Google. Huawei’s research center in Istanbul, meanwhile, is the company’s overseas hub for software development and is looking to hire more than 40 people. Software became a priority for Huawei after the U.S. crackdown crippled its hardware businesses. Efforts in this area have included building HarmonyOS, its answer to Google’s Android operating system for smartphones and other devices.

In Canada, Finland, Sweden and Russia, multiple AI research and computer architecture positions have come open in the past month, while the company is seeking scientists for its basic research base in Zurich, Switzerland.

The company is still hiring hundreds of engineers across China, too, and it is willing to pay for top talent. A senior engineer with Huawei on average makes $191,024 a year, including bonuses. The average base salary for a senior engineer at Google, by comparison, is $161,733, according to a survey by recruitment platform Glassdoor.

In his recent speech, Ren described securing top talent as “vital in any battle.”

“We have enough money, enough space to house global talent,” he told executives as he encouraged them to identify promising candidates to build up Huawei’s “battle force” as soon as possible.

The company already employed more than 37,000 people overseas as of 2019, according to its most recent corporate social responsibility report, out of its total workforce of over 190,000.

The question is whether this recruitment and investment drive can help offset the damage done to its traditional cash cows of smartphones and telecom equipment. 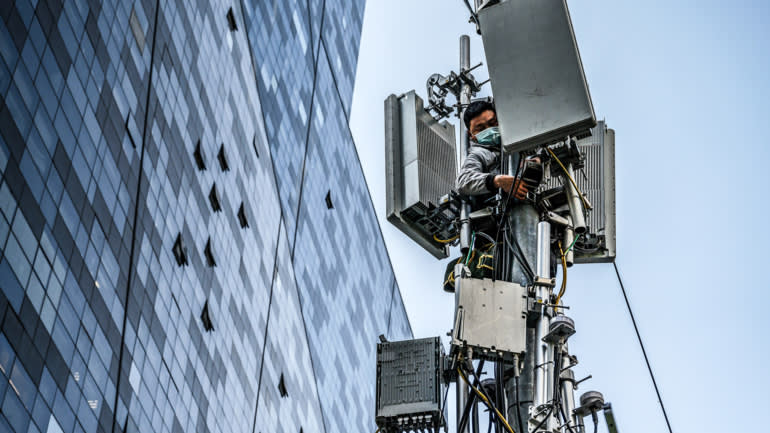 Thanks to its telecom equipment, “Huawei will continue to thrive in China, the world’s largest 4G and 5G markets,” an analyst says.   © Getty Images

“Huawei lost more than 90% of its footprint all across Europe, where more than 40 5G contracts went to Ericsson, and it is under attack everywhere else except Russia and some pockets in South East Asia,” Teral said.

The veteran telecom analyst said the U.S. is providing funding to urge Ethiopia and other countries in Africa and the Middle East to replace Huawei equipment. “But Huawei will continue to thrive in China, the world’s largest 4G and 5G markets, anyway, and that trend will continue,” the analyst said.

Huawei’s global smartphone market share, meanwhile, plunged to 4% in the first quarter of 2021, from 18% in the year-earlier period, when it was still the world’s second-largest smartphone maker, after Samsung Electronics, according to Counterpoint Research. The company also sold its budget handset line Honor to investors led by the Shenzhen local government late last year.

HiSilicon Technologies — once China’s largest mobile chip developer and a crown jewel of the Huawei group — has struggled since access to its most important production partner, Taiwan Semiconductor Manufacturing Co., was cut off by U.S. export controls. 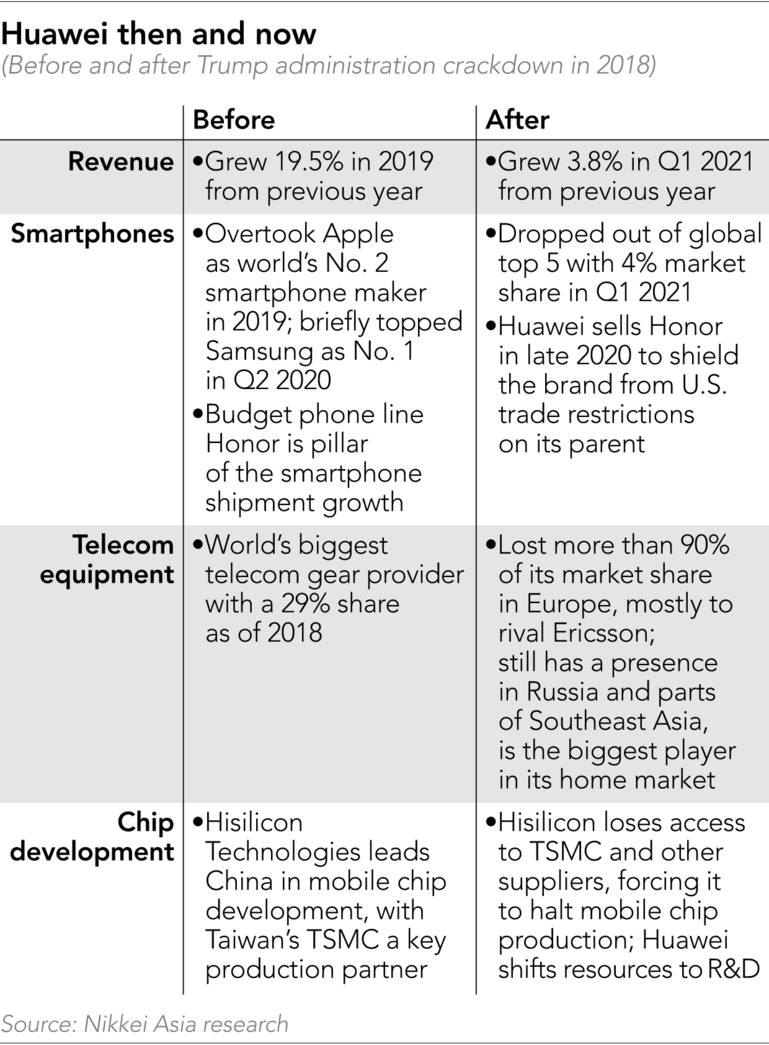 Still, Huawei has an important factor in its favor: its ambition to build a self-reliant chip supply chain dovetails with Beijing’s own goals on that front.

China launched the so-called Big Fund in 2014 to build up its chip industry. In 2019, after Huawei came under U.S. pressure, Beijing poured an additional 204 billion yuan ($31.59 billion) into the investment fund.

As of June this year, Huawei had invested in a further 10 chip-related companies, according to Nikkei analysis of data from Qichacha, a Chinese provider of business data. These include Rainbow Simulation Technologies and LEDA Technology, which provide chip design software — a segment dominated by American suppliers like Synopsys and Cadence Design Systems.

LEDA Technology, established in November, says its mission is to “realize China’s self-reliance in EDA tools,” and it has gained strong support from the government and private clients. Rainbow Simulation said its design software tools can be used for various types of chips, telecom systems, defense and space tech. 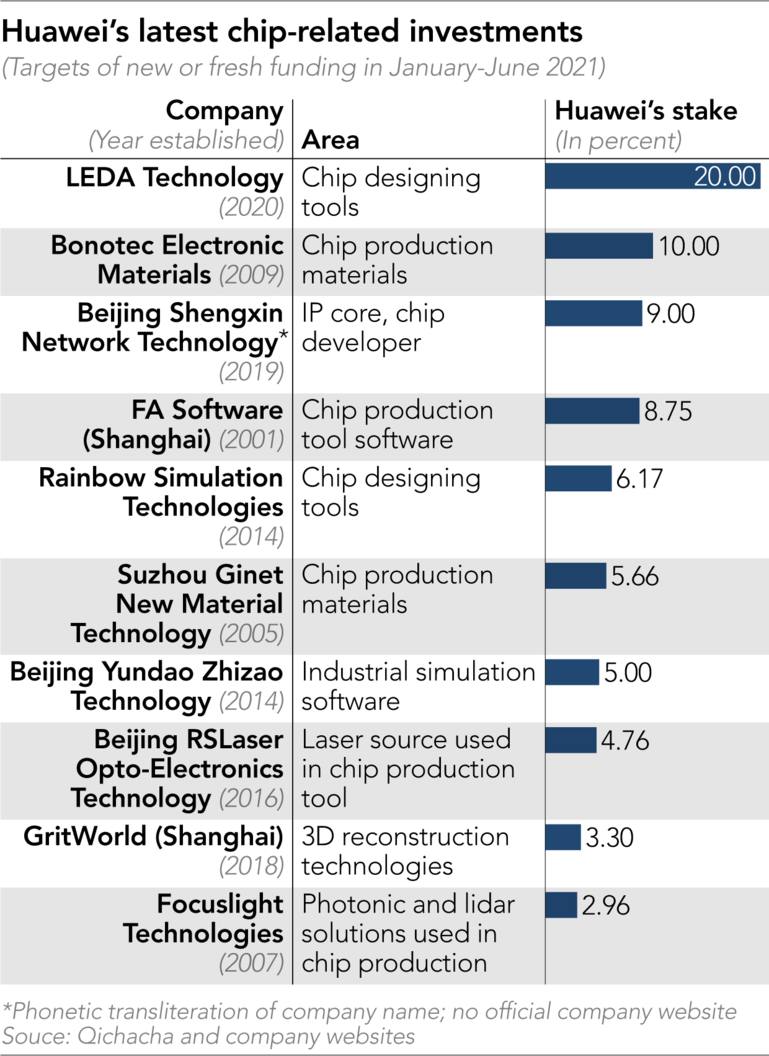 There is, of course, no guarantee such investments will pay off.

“Huawei is trying to patch up its vulnerabilities in the chip supply chains … by offering resources and cultivating rising Chinese suppliers,” TIER’s Chiu told Nikkei Asia. “However, whether these Chinese companies’ can replace their foreign counterparts remains to be tested and verified by the market.”

Nevertheless, Huawei’s efforts appear to be bearing fruit. While its smartphone and telecom equipment businesses, which contributed 54% and 34% of the company’s total revenue respectively in 2020, are slowing, its enterprise business group is growing rapidly. The business, which provides cloud computing and digital transformation solutions, mostly to government agencies, saw its revenue increase 23% last year, the fastest growth among Huawei’s business groups. China’s New Infrastructure Initiative, which sees 5G network installment and digital transformation as key focuses, has been a growth driver to Huawei to supply 5G base stations and cloud-computing installments at home.

“For Huawei, under such U.S. pressure, the best way is to keep its research and development and innovative and leading research going, and to develop areas that the U.S. has no strict restrictions,” Donnie Tang, a tech analyst with Nomura Securities, told Nikkei Asia. “This way Huawei could retain its talent base and could seek and wait for future opportunities. It’s better to fight for survival, and to keep breathing, rather than give up too soon.”