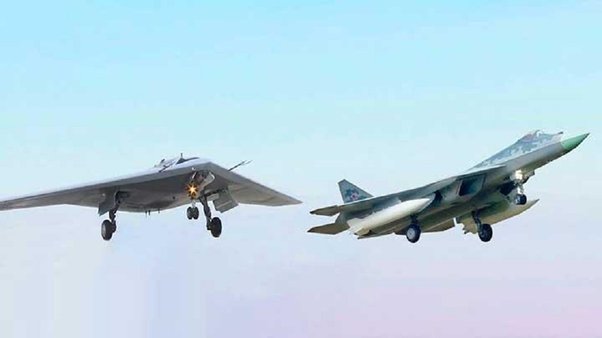 Russia’s S-70 Okhotnik Unmanned Combat Aerial Vehicle (UCAV), which can also operate as a ‘wingman’ to the Su-57 fighter, is Artificial Intelligence (AI) enabled and can reach outer space when fitted with suitable engines.

The United States tried to develop UCAV with similar performance characteristics but gave up the project after its engineers could not overcome the technical obstacles. This was according to military historian and director of the Museum of Air Defense Forces Yuri Knutov, Izvestia reported.

The S-70 Okhotnik is powered by an AL-31 turbojet engine and is expected to fly at 1,000 kilometers an hour and a range of 6,000 kilometers.

It is equipped with electro-optical targeting, radio, and “other types” of reconnaissance equipment, with its internal bays carrying a payload of 2.8 tons of weapons.

“It has many elements of a sixth-generation drone. In addition to low visibility and supersonic speed, it can reach high altitudes and, in the future, into outer space. It, however, depends on the engines that still need to be created,” the expert said Knutov said.

Knutov also directly hinted about the intended mission profiles of the Su-57, the Okhotnik, and their loyal wingmen/manned-unmanned teaming.

“The Su-57 can control a swarm of Okhotnik drones, and this combination opens up great opportunities for solving strategic combat missions. The ‘Hunter’ is made in the same way as the Su-57. And in Ukraine, Su-57 aircraft solved combat missions and returned unnoticed,” Knutov added.

This indicates that Su-57 and the Okhotnik team would either destroy large strategic targets like North Atlantic Treaty Organization (NATO) command centers and civilian-military targets or ease the way for large bombers like the Tupolev Tu-160, Tu-22 or MiG-31s that can carry the Kh-101 cruise missile or the Kinzhal hypersonic missile to release their payload.

Vladimir Artyakov, First Deputy Director General of the Rostec State Corporation, boasted that none of the North Atlantic Treaty Organization (NATO) countries have a UCAV system that can match the Okhotnik.

The drone has been progressing rapidly, with a version having a flatter nozzle unveiled in December 2021 and the announcement to enter serial production by 2023. Rostec CEO Sergei Chemezov gave the information to President Vladimir Putin. Chemezov added that a new ground control post was being developed for the drone, indicating the drone might begin reaching Russian Air Force (or Voenno-vozdushnye sily Rossii, VVS) units by 2024.

The experimental prototype made its first flight on August 3, 2019, which lasted more than 20 minutes. A 30-minute flight alongside the Su-57 fighter was reported a few months later. In December 2020, RIA Novosti said that Okhotnik conducted simulated tests with infrared (IR) and radar-seeker air-to-air missiles to test the UCAV’s fire-control systems at the 185th Combat Application and Training Center at Ashuluk.

It conducted its first live-fire test by releasing unguided bombs on a target at the Ashuluk training ground near the Caspian Sea, according to a report in January 2021.

On May 28, RIA Novosti reported a “series of guided missile firing” tests, which Janes Defense concluded was the Kh-59MK2 standoff cruise missile. But on June 9 and July 27, developments involving the Su-57 indicated Russia was progressing rapidly towards possessing an operational manned-unmanned teaming capability.

RIA Novosti on June 9 reported four Su-57s being used in the ongoing Special Military Operation (SMO) in Ukraine in what appeared to be a Suppression of Enemy Air Defense (SEAD) operation.

The quartet was “linked to a single information network to destroy air defense systems through automatic communication systems, data transmission, navigation and identification in real-time. The low radar visibility of the Su-57 was also confirmed,” the article said.

Andrey Yelchaninov, Deputy Chairman of the Board of the Russian Military-Industrial Commission, later said in a separate interview that the planes and drones could interact “not only with each other but also in various types of combat formations.” TASS, on July 27, reported that a two-seat variant of the Su-57 is to be developed to control a swarm of Okhotnik combat drones “in network-centric interactions to strike aerial and ground targets.”

The June 9 operation indicates that it is unlikely the Su-57 will not be used for routine tactical missions, with the bulk of the air-to-air and air-to-ground missions being possibly carried out by the Su-30 and Su-35. At least initially, its mission profile would involve taking out enemy fighters from beyond visual ranges with missiles like the Vympel R-77 and SEAD or Destruction of Enemy Air Defense (DEAD) operations.

Even reports on Okhotnik’s May 28 test said the platform could “effectively hit small-sized camouflaged targets with missiles at different times of the day.”

While there is no evidence of Su-57 being used in the SMO, if true, it must have been conducted to freeze certain operational procedures and verify the performance of its components, like sensors and data linking/transmission. The Active Electronically Scanned Array (AESA) radar.

Wait For Evidence Before Celebrating

A US-based expert on drone and Russian-military technology, while skeptical about the outer space capability of the S-70 Okhotnik, said it was designed originally as an “air defense penetrator.”

Thus, the Su-57 and S-70 teams would first be employed in SEAD, and DEAD roles are largely confirmed. This is also because concepts from the US about loyal wingmen working with F-35s show taking out dense air defenses by employing the UAVs for ISR roles, decoys, and limited weapons release.

“The outer space flight capability of the S-70 is coming from people not directly involved with the project and, therefore, must be taken with a pinch of salt. Many of its proposed functions are built around an air defense penetration role that it was originally designed for,” said the American expert while speaking to the EurAsian Times.

As for the outer space flight capability, which can be assumed to be at the stratosphere (around 50 kilometers high), the US military analyst said the unmanned aircraft eliminates the constraints imposed on human physiology when operating at those altitudes.

“Taking the pilot out simplifies operation at that level, but again, we need to see proof of at least one such test before we can conclude that is possible,” he added.