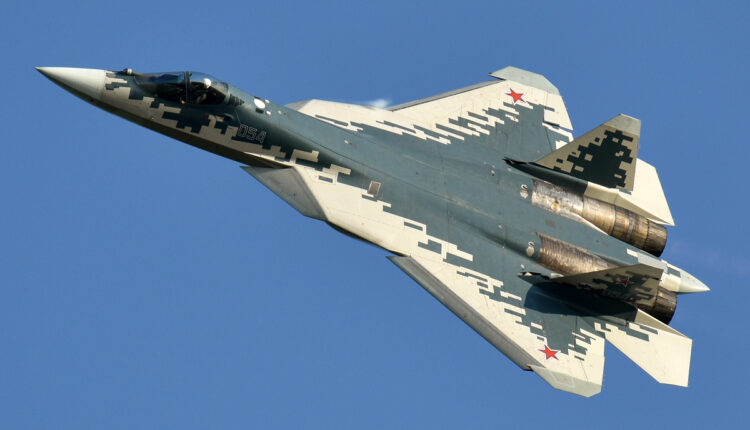 The trials of air-to-air missiles for the Russian fifth-gen Sukhoi Su-57 fighter jet that can destroy stealth targets are expected to be completed by this year, reported state-run news agency Tass. The Su-57 is the only operational stealth fighter jet besides the US’ F-22 & F-35 and China’s J-20.

The Defense Minister also stated that serial deliveries of the missiles to troops are also scheduled for the end of the year.

These missiles “are designed to outfit the advanced Su-57 aircraft platform and other carriers,” the defense minister said. “This year, we are planning to complete the state trials of the missiles and deliver the first serial batches for operation,” Shoigu said.

The new armament will increase the combat effectiveness of the aircraft in aerial stand-off situations and extend the range of engaged aerial targets, including small-size vehicles based on stealth technology.

Vympel is one of the top missile manufacturers in Russia. The firm specializes in the designing and development of air-to-air missiles like the R-77, R-74/K-74, and R-73.

On November 18, 2019, a ceremony marking the opening of the upgraded production facility of the Vympel State Machine-building Design Bureau saw the unveiling of the new advanced air-to-air missile for the Su-57 fifth-generation fighter. However, the missile’s name and its performance specs were kept a secret.

The missile in question is said to be based on the medium-range R-77-series. It seems to be considerably shorter than all members of that family, according to experts. The R-77 is an air-to-air missile and is believed to be the primary air-to-air armament of the Su-57.

The diameter of this new missile is comparable to that of standard R-77 but could be wider. Although the new missile from Vympel has a four grid-fin design similar in general to the R-77, there are some substantial differences.

The rear nozzle seems to be wider, indicating that it is capable of thrust vectoring. The weapon also appears to lack the strakes located on the longer missile’s rear fuselage. Meanwhile, it is also anticipated that the missile will also have passive radar homing and infrared seekers, just like R-77 variants.

The R-77 medium-range air-to-air missile is comparable to radar-guided U.S. AIM-120 AMRAAM (Advanced Medium-Range Air-to-Air Missile). The R-77 was first introduced in 1991, but its development took an extremely long time.

The upgraded R-77-1 went into service with the Russian Air Force in 2015. It has also been used on Su-35S fighters in Syria. The K-77M is reported to be the latest variant produced of the missile.

The upgraded K-77M also features an improved active electronically-scanned array radar seeker and a new dual-pulse rocket motor.  It can engage anti-aircraft missiles, including those coming from the rear. The missile also has a range that is nearly double that of the original R-77—up to 100 miles. This could undoubtedly give the Su-57 an advantage over rival aircraft.

Russia has been working constantly to improve its most advanced Su-57 fighter, which is equipped with the most cutting-edge onboard technology and can cruise at supersonic speeds.

In 2021, Russia also announced its plans to equip its stealth fighters with a new anti-ship missile to eliminate maritime threats, as reported by the EurAsian Times. This kind of missile can be used to target ships and large boats.

Su-57 is a single-seat, twin-engine, multi-role aircraft developed to eliminate all kinds of air, land, and marine targets. The Su-57 has not yet been exported or has not really found buyers. That means the information about the Russian-origin jet is limited.

The advanced Su-57 started going through development in 2002, but the first flight didn’t happen until January 2010. The aircraft, the first of its kind in Russia to use stealth technology, was also built with supercruise, super maneuverability, and advanced avionics to fend off attacks from fighters of a previous generation as well as from ground and naval defenses.

The aircraft also has a radio-absorbing coating, internal weapons bays, supersonic cruise speed, and the most modern onboard technology. Additionally, it was previously reported that Russia’s stealth fighter jet will also be equipped with Hypersonic missiles.

The fifth-generation aircraft is designed with two substantial internal weapons bays that are lined up side by side and span almost the entire usable length of the aircraft. Up to four K-77M radar-guided missiles with a range beyond visual range can be stored in each of the bays.