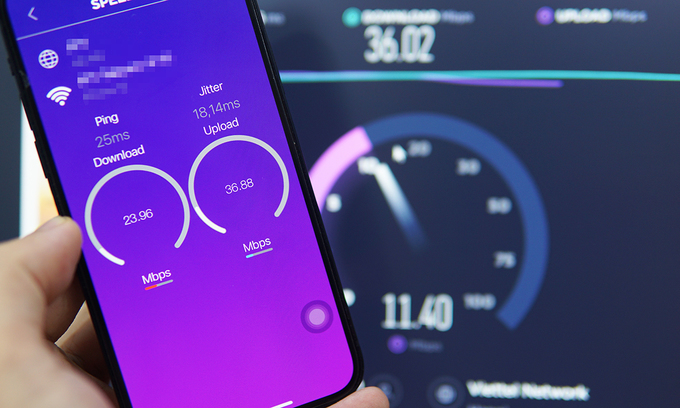 Share
An Internet speed test is performed on a smartphone in Hanoi, June 8, 2021. Photo by VnExpress/Luu QuyVietnam will start researching 6G wireless networks in 2022, says Information and Communications Minister Nguyen Manh Hung.Addressing a 2021 telecom review conference last weekend, Hung said Vietnam’s telecom industry should “be in the top group in terms of deploying 5G and developing 6G networks in the world.”

He said Vietnam will carry out 6G research this year alongside nationwide deployment of the 5G network.

According to the ministry Department of Telecommunications, a steering committee for 6G research development has been formed. Vietnam is one of the world’s first ten countries to set up this committee.

Hung also set a target of 6G frequencies being licensed by 2028 before moving on to its commercial rollout.

“Telecom networks must quickly transition to cloud-based and software-based architectures, so that the network becomes intelligent and flexible, and can be software-configured into numerous specialized sub-networks. Open RAN will be used as technology for 5G, 6G development,” he said.

Vietnamese companies should target to successfully research and manufacture 5G and 6G equipment, transmission equipment, and terminal equipment, he added.

A representative of the department said that Vietnam will commercialize 5G this year and aim to have 25 percent of the population using the technology by 2025. He said 4G services currently cover 99.8 percent of the country.

6G technology is the next step after 5G that is being researched in a few countries including the U.S. and China.

In theory, 6G could reach speeds of one terabit per second, it has been reported.

The 6G network is expected to lay the groundwork for an “intelligent era” in which AI and robots become commonplace. However, no technical standards or frequencies for 6G have been agreed upon as yet.