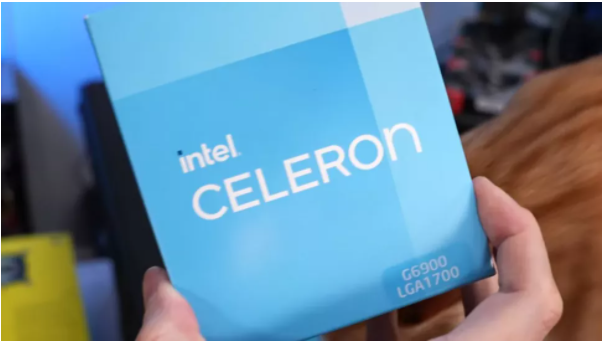 Overclocker der8auer continued checking through the latest ADL-S chips to see which might have HWBot world record potential.

On Sunday, we reported on the discovery that base clock (BCLK) overclocking is now available on non-K Intel Alder Lake-S CPUs. The only prerequisite seemed to be that you would need a high-end Z690 motherboard with a BCLK unlock feature in the BIOS. Today, OC expert der8auer, aka Roman Hartung, continued his investigations to the lower ranks of the ADL-S line-up and discovered that the lowly Intel Celeron G6900 could run at 5,338 MHz – a 57% overclock.

Regarding the Alder Lake Intel Celeron G6900, in the embedded video you can see der8auer install this CPU in the same Asus ROG Maximus Z690 Apex motherboard as used in his previous video, and in a few moments push its two non-Hyperthreaded cores to beyond 5 GHz. The Celeron required a significantly higher BCLK push to get it beyond 5 GHz, as it started from such a low clock speed. Interestingly, der8auer noted he made the first use of the hardware buttons on the Apex motherboard for nudging BCLK in real-time, in order to achieve a BCLK of 157 MHz, and a resulting 5,338 MHz with the x34 multiplier.

In benchmarks and tests the overclocked Intel Alder Lake Celeron G6900 still didn’t really shine, however. Remember, this is still a 2C/2T processor in 2022, and though this is a great increase for the Celeron it isn’t enough to push past other Celeron limitations.

If you want to read and see more information about the Intel Celeron G6900, on Saturday we reported on a YouTuber’s gaming benchmarks on a system based around this processor. Spoiler alert – this ADL-S 2C/2T chip was not very good in AAA games from the last half decade or so.

Another processor featured in the video today was the Intel Core i3 -12100, with a much more useful configuration of 4C/8T. Only a few years ago Intel Core i7 chips rocked 4C/8T, and der8auer sees much more potential for HWBot world record attempts with this sub-family of the ADL-S range. The overclocker was impressed by the ease of achieving this all-cores 5,400 MHz overclock with the i3, which is about 26% faster than the standard boost clock.

In Cinebench R20 multi-threaded tests, the overclocked Intel Core i3 -12100 was able to closely challenge the likes of the AMD Ryzen 5 5600X. Intel’s Core i3 is approximately half the price of the Ryzen.

With the above tests der8auer had moved from an AiO CPU cooler to a more capable liquid loop using a Hydro X Series XC7 Pro block from Corsair. Moreover he wanted to point out that he had also upgraded the thermal paste to Thermal Grizzly Kryonaut Extreme.

Once overclockers get a feel for the full ADL-S range we should expect a slew of new world records on HWBot, when we will see which processors respond best to extreme cooling using LH2, Helium and so on.

Summing up his video, der8auer was obviously impressed and said that he hadn’t seen overclocks of this scale since the Intel 775 era.

If you are interested in choosing the right gaming CPU for your budget in 2022, please check out our Best CPU for Gaming in 2022 guide.

It’s Not About the Camera, It’s About Who’s Pressing the Shutter