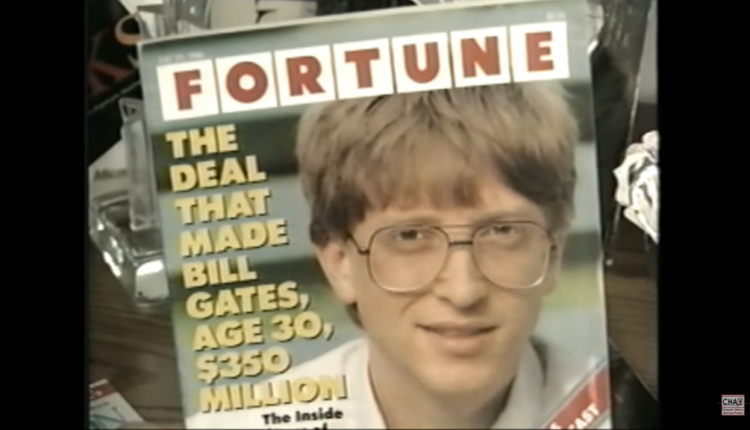 Thanksgiving is a time for gathering together with familiar faces, and maybe to look back and take a mellow moment to reflect on the days gone by. So maybe it’s appropriate that this month the Computer History Archives Project shared a very special find: a video Microsoft created back in 1994.

This video’s washed-out colors suggest its own fading over time, even before the ’90s-era sound of synthesizer music and electronic drums kick in. A mellifluous announcer croons, “Microsoft — a name and reputation known around the world,” as the video shows footage of a flag flying outside the company’s Redmond headquarters with the logo for Microsoft Windows.

And then it touts the company’s still-strange-in-1994 vision of “a computer on every desk, in every home…” —Before adding the often-forgotten ending of that sentence: “…running Microsoft software.”)

It’s all a forgotten glimpses of a world from long ago, and a chance to look back into the earliest days of personal computing. But maybe it also offers a chance to get a fresh perspective on our own modern world of computing — by remembering at least some of how it all got started

The video boasts of a young company that employs “thousands” of people worldwide. (Today Microsoft employs an estimated 181,000 people, according to market data site Statista.)

And soon, there it is — the moment you’ve been waiting for — Windows circa 1994. 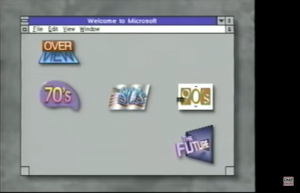 A Windows user smiles knowingly, then clicks on a desktop icon labeled the 70’s, bringing up a picture of 19-year-old Bill Gates and 22-year-old Paul Allen from February of 1975. It’s shortly after they’d created the BASIC programming language (along with Monte Davidoff ) for the Altair 8800, which the announcer touts as the first programming language created for a personal computer. There’s shots of a ’70s-era Altair 8800 computer, and even its documentation (with its blocky all-caps cover page).

“Bill and Paul knew they were onto something important: a personal computer,” the announcer says.

And then suddenly, there’s footage of Bill Gates himself. It’s now 1994 — Bill is 39 — and his memories of the 1970s are crystal clear. “Even at that point, we had thought ‘Wow, this microprocessor is going to do something incredible,’” Gates remembers. “As early as 1971, Paul and I had talked about the microprocessor, and it was really his insight, that because of semiconductor improvements things would just keep getting better.

“And so I said to him, ‘Whoa, exponential phenomena is pretty rare and dramatic. Are you serious?’”

“They were serious,” the announcer jumps in, “and quickly realized these strange little boxes were nothing without powerful and useful programs!” Then, putting it even more succinctly, he sums up the tsunami that was about to come with three words. “Hardware needs software.” 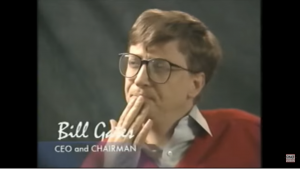 Other milestones flash by — the formation of Microsoft Far East to handle international sales, the creation of Microsoft’s own implementation of the Fortran and Cobol programming languages. “Within a year, the Microsoft BASIC compiler was running on virtually every computer,” the announcer adds nonchalantly.

And after one last milestone — the opening of new offices in Bellevue, Washington — the smiling Windows users click over to a folder named “The 80s.”

The announcer then casts his gaze back 13 years to a moment that now seems like ancient history. “In 1981, it was time to take a new step. Microsoft reorganized as a privately-held corporation with Bill Gates as president and Paul Allen as vice president.”

“We knew that 16-bit computing was on its way,” Gates says, “and we saw that it could be a good business machine, and we decided to focus a lot of early work on that Intel chip.”

The video calls out August 2nd, 1981 as another milestone — the day IBM released a personal computer running Microsoft’s “16-bit operating system, MS-DOS, version 1.0.” (Also included was the BASIC programming language.) Other milestones include the launch of subsidiaries in France, Germany, and the UK, and the creation of the book-publishing arm Microsoft Press. 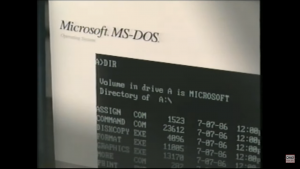 And while we’re remembering days gone by, the video cuts to a short but thought-provoking archival sound clip of Douglas Engelbart, the original creator of the mouse, in which Engelbart admits “I don’t know why we call it a mouse.

“Sometimes I apologize. It started that way, and we never did change it.”

“We continued to evolve the design,” Bill Gates says, “going to a sleeker and sleeker appearance design,” as the video cuts through several early iterations of the Microsoft mouse. (And not a one of them is wireless…)

There are more glimpses of forgotten technologies when the announcer remembers the “innovative marketing strategy” for the introduction of Microsoft Word for MS-DOS in 1983: “A demo disk was included in an issue of PC World magazine.” Floppy disks later gave way to CD-ROMs, and eventually just to online software-as-a-service. But instead, this video’s announcer takes us backward in time, to a world where Microsoft Windows “was announced at the 1983 Comdex tradeshow. But it would be two long years before it would be released.”

The ruthless competition between Apple computers seems glossed over, with Gates saying casually and even admiringly that Apple “bet their company” on graphical interfaces, adding almost after-the-fact that “that’s why we got so involved in building applications for the Macintosh early on — we thought they were right. And we really bet our success on it as well.”

Other moments in history flit by just as breezily, like a scrapbook that’s been pulled off a dusty shelf. Microsoft Flight Simulator — first introduced in 1982 — become the world’s best-selling game for personal computers. There’s Microsoft’s IPO in 1986 (when “a new force in American business was launched.”) 30-year-old Bill Gates makes in onto the cover of Fortune magazine. There’s even time-lapse photography that actually shows the construction of their new corporate headquarters in Redmond in 1985. 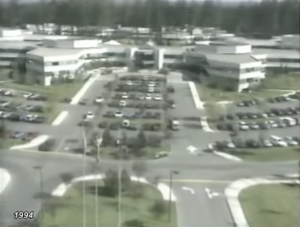 And soon the video’s Windows user clicks on the ’90s folder. “In April of 1990, a Russian version of MS-DOS was released, making a total of 14 language versions available,” the announcer tells us.

In footage showing the announcement of Windows version 3, Gate dubs it “a major milestone in the history of the PC industry!” Bill Neukom, Microsoft’s then vice president of legal and corporate affairs appears, and points out it was the culmination of a full eight years of Windows development. Fall of 1990 finds Gates making a “visionary address” to Comdex. And what made it visionary? “Bill Gates put forward the idea of an information highway,” the announcer explains.

The 1994 video argues Gates was ahead of the curve, intently telling the audience at Comdex that year that “We need a vast array of information to be available to users” and urging hardware and software makers — as well as distribution channels — to come together to realize “the vision of information at your fingertips.”

The peppy music continues, as the announcer tells us Windows 3.0 became “a worldwide standard in computer interfaces” — although it was only available in 12 languages, and in 24 countries.

Predictably the next milestone is the release of Windows 3.1 in May of 1992. Six weeks after its release, Microsoft had sold… 3 million copies. (Which the announcer reminds us was “a number unprecedented in the industry.”) Now we reach 1993, a year in which “Home computing is rapidly growing, and half of all homes with personal computers have school-age children.” But we’ve reached a moment that sums up a much of the future to come with just one sentence.

“As those children grow, a new generation of computer users will create a new demand for new tools and new products.”

it’s a year when 40 million PCs are running Microsoft Windows. The announcer tells us it’s “the standard of choice among personal computer users worldwide.” Microsoft programs are now published in a whopping 28 languages. And finally the Windows user in the 1994 video clicks on a folder labeled “The Future.” It pulls up a pre-release version of the now-forgotten Microsoft Space Simulator. “As we look ahead, Microsoft will remain on the cutting edge of software development,” the announcer says. Over a driving backbeat, the music changes to a more futuristic-sounding synthesizer, as the announcer promises a “shifting emphasis” to home services (while continuing to serve the corporate marketplace).

But the video is still showing clunky desktop computers with floppy disk drives. 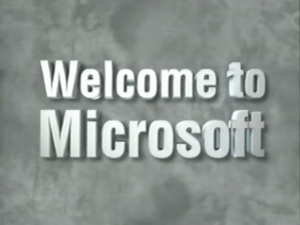 In a weird way, Gates misses part of the future, imagining a burgeoning market for software publishing but without foreseeing the ultimate prominence of online applications — and, eventually, data storage and at-scale data analytics. And “It was that ‘computer on every desk’ that led them to miss the smartphone,” quips one YouTube commenter.

Gates seems to be thinking about a world where we gather together in our cozy dens, enjoying space simulators and family-finance spreadsheets. There he is, wearing an earth-toned sweater and sharing a wholesome vision of making products that are enjoyable and useful and “draw in the whole family, so that these devices in the home are really something that are very, very worthwhile.”

There’s a comforting optimism in this moment, as the announcer concludes this segment on the future by saying cheerily that “The Microsoft vision of a computer on every desk and in every home —  in this country and around the world — is becoming a reality.”  Of course, what the video didn’t mention would be the release of Windows 95 in the following year, which in fact brought Microsoft very close to this goal, a goal that seemed radical then and quaint now.

With breezy corporate enthusiasm, the announcer anticipates,  without a hint of concern, a world where “a vast universe of information will be at the fingertips of everyone.”

“I think there’s an absolutely incredible opportunity here,” Gates says. “And I think it’s going to be very exciting.”

The New Stack is a wholly owned subsidiary of Insight Partners, an investor in the following companies mentioned in this article: Bit.