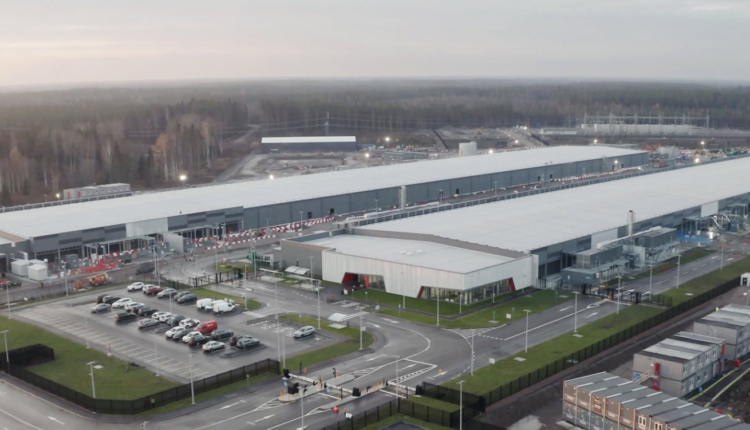 The Microsoft datacenter region in Sweden helps customers make the best use of their data while also meeting the company’s sustainability goals. The region, which includes a presence in Gävle, Sandviken and Staffanstorp, is the first hyperscale cloud region to use the Vattenfall 24/7 solution in a commercial product to deliver 100 percent renewable energy. In addition, Microsoft’s datacenter region seeks zero-waste certification and includes a Microsoft Circular Center, designed to extend the lifecycle of servers through reuse, creating a circular economy for the Microsoft Cloud. Modern datacenters must manage an immense amount of heat. Microsoft is utilizing industry-leading cooling techniques combined with the cloud’s computing efficiency to substantially reduce the energy required to deliver cloud services. These free cooling methods take advantage of natural weather elements to control the temperature. In this corridor, dampers on the right bring outside air in. Dampers in the ceiling bring warm return air from the servers into the gallery. During warm outdoor temperatures, the outdoor air dampers are fully open. During cool outdoor temperatures, the outdoor air dampers and return air dampers modulate together to heat the datacenter. Air filters on the left ensure that clean air is blown into the production environment. The technology allows Microsoft to mix the warm air inside the building with cool air from outside to maintain the right temperature. The Swedish datacenter region features free cooling. The direct evaporation of water is used to produce humidification with limited energy consumption. This simple, cost-effective method results in a 30 percent reduction in energy costs and 90 percent less water usage than other water-based cooling systems. To provide the needed water for the humidification at the datacenter, a rainwater harvesting method was developed to offset the demand for fresh water. Rain is captured, diverted and stored from areas around the building for later use in the datacenter. The datacenters’ servers will be cooled with only outside air 100 percent of the year, and the rainwater captured at the datacenter site will be used primarily to provide humidification and to support onsite datacenter facilities. When the server blades this datacenter technician is pulling from a rack reach the end of use, they won’t be heading to the dump. Instead, Microsoft’s Circular Center extends its lifecycle through repurposing and recycling. These circular centers are the first of their kind in the industry. Using machine learning, Microsoft can process servers and hardware that have been securely wiped of all data and decommissioned, and then sort the pieces that can be reused or sold to customers in need of those parts. The Swedish Circular Center will have the ability to support 12,000 servers per month. At the Amsterdam Circular Center, the program has resulted in 83 percent of server and network parts being reused, versus 78 percent for all of Microsoft’s cloud operations. The two smaller containers in the center of this photo may look like normal diesel-powered generators, but they are another example of a sustainable solution Microsoft is using at the Sweden datacenter region. These backup generators, which are used for no more than a few hours a year or less at our datacenter sites, most often for routine maintenance or for backup power during a grid outage, will run on less carbon-intensive fuel supplied by Preem. Microsoft expects this to result in at least 45 percent lower net carbon dioxide emissions compared to conventional diesel fuel. Renewable diesel is sourced from biomass, like paper and pulp residue, and doesn’t require any alterations or modifications to the generators that run on those fuels. Microsoft will be using Preem’s Evolution Diesel Plus at the datacenter sites in Sweden, which contains 50 percent renewable diesel.